Getting married in Singapore (Muslim marriages) 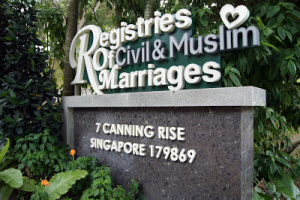 Signage for the compound of the two registries - ROM and ROMM.

In order for a marriage to be legally recognised in Singapore, couples must register and their marriage through the Registry of Marriages (ROM). The building housing the Registries of Civil and Muslim Marriages in Singapore is located at 7 Canning Rise. Since its official opening in 1983, the building has undergone 2 major facelifts in 2000 and 2011 to improve the experience of couples.[1] The ROM also provides basic solemnisation services for both civil and muslim marriages on a first come first served basis. The closest MRT stations to ROM are Bras Basah (CC2) and City Hall (EW13/NS25).

Before registering for marriage, individuals have to meet the requirements as stipulated by the matrimonial law of Singapore. Couples of 21 years old and above are allowed to register for marriage at their own will. Polygynous marriage, where a man has multiple wives, is allowed for Muslim marriages. However, this can only be done with the Kadi’s approval.[2] A Kadi is a state-appointed religious official with the ability to carry out solemnisations. The Kadi will arrange for separate interviews with the first wife and husband. Approval will be granted only after reviewing the information presented at the interviews.

Minors between the age of 16 to 20 are not allowed to register for marriage unless with the Statement of Parental/Guardian Consent.[3] They have to be accompanied by both parents for a interview with the Kadi or Naib Kadi before proceeding with the registration. Minors are also required to complete a compulsory Marriage Preparation Programme at the INSPIRASI Hubs approved by the Ministry of Social and Family Development.[4] The two INSPIRASI Hubs are located at Bukit Batok and Pasir Ris with the closest MRT stations being Bukit Gombak (NS3) and Pasir Ris (EW1) respectively.

Before filing a notice for marriage, couples are required to confirm the details of their Hantaran and Maskahwin.The Hantaran is a marriage gift usually in the form of cash and/or material gifts such as bags or shoes. The Hantaran is exchanged between the families of the bride and groom. The Maskahwin is a compulsory marriage gift which is given by the groom to the bride, as a symbolism for his responsibility as a husband. It can be in the form of cash or other valuable goods like gold and silver. The value of of the Maskahwin should not be below SGD$100.[5]

The application for marriage is mostly an online process. Couples must submit a “Notice of Marriage” via ROMM’s online platform (ROMM e-filing service). The documents required for filing a Notice of Marriage are as such:

Within 3 working days of filing the Notice for Marriage, the couple must be present at the ROMM premises for a Verification of Documents and Statutory Declaration (VD/SD) appointment.[6] Hence, if a couple filed for marriage on a Friday (18 January) the latest appointment day would be the following Wednesday (23 January). The bride, groom, and Wali are required to attend the VD/SD appointment. A Wali is a male relative from the bride’s paternal family who was responsible for the bride’s life before marriage. In most cases, a bride’s lawful Wali would be her father. 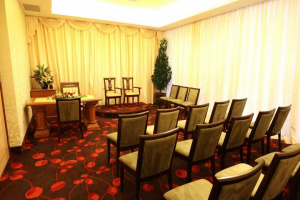 The official solemnisation will only occur after the VD/SD appointment. The bride, groom, Wali, 2 male witnesses and the Kadi or Naib Kadi must be present during the solemnisation. Like other registered solemnisers, the Kadi is not paid for his services. However, it is standard practice for couples to give their solemniser a token of appreciation. Couples may choose their preferred Kadi from a list of registered individuals on the ROMM website.[7]

The exchange of Hantaran between the bride and groom’s families will take place before the solemnisation procedure begins. During the ceremony, the Kadi or Naib Kadi will conduct the solemnisation and the groom will have to read the marriage conditions. Prayers will be said by the Kadi or Naib Kadi before the groom passes the Maskahwin to his bride. At the end of the ceremony, the marriage certificate will be collected as the couple is pronounced man and wife.

The marriage fee for Muslim marriages where at least one individual is a Singaporean or a permanent resident is SGD$39.00. This fee is inclusive of a solemnisation venue in ROM. This fee does not include the expenses on the Maskahwin (minimum SGD$100.00) and the Hantaran. As such, a couple can expect to spend a minimum of SGD$139.00 when applying for a marriage in Singapore. Couples who are both foreigners are expected to pay a marriage fee of SGD$128.00. Additional fees for other common services are as follows:[8]