Fred Cheong (born 1964) is a former Singapore Armed Forces (SAF) military regular, where he served in the commando formation under the Special Operations Forces (SOF) unit.[1] In 1991, he was part of the SOF unit that conducted a hostage rescue operation during the hijacking of the Singapore Airlines SQ117 flight. A fully ordained monk since 2017, he now goes by the name of Venerable Tenzin Drachom.[2] "It is something I felt deeply inside me since I was young, to become a monk. I remember I would generate some wish, in secondary school, that I would go to the temple and stay there."[4]

Fred Cheong enlisted into the National Service in 1982 before deciding to sign-on as a full-time soldier.[5][6] During his military career, he often woke up in the early mornings to pray before leaving for camp.[5] Fred Cheong was married to Cyndi Yee for 20 years before she passed away in 2012 from a stroke.[7] 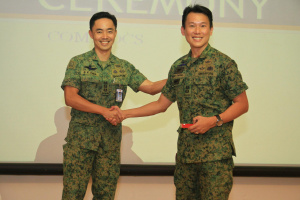 For over three decades, Fred Cheong served as a military regular in the Singapore Armed Forces (SAF) where he was once a part of the commando formation.[3][8]

In 1984, Fred Cheong was one of 32 soldiers who were selected for the Special Operations Force (SOF)'s selection test. He graduated as a SOF trooper in April 1985 after completing his training; which included military courses such as combat diving, ranger and reconnaissance patrol.[1] Recalling the experience in a 2019 interview with Channel News Asia, he was quoted to have said:

“I felt really good because it was the most elite and difficult course. Many people desired it, but not many were able to do it.”[1] 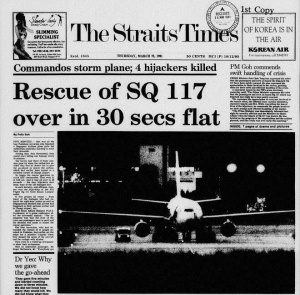 Fred Cheong only revealed his involvement in the rescue in 2019. Photo from source.

On 27 March 1991, Fred Cheong was one of the SAF commandos involved in the hostage rescue operation of SQ117; an inbound flight to Singapore from Kuala Lumpur.[1] The flight had been hijacked by four male Pakistani nationals the night before.[9] After negotiations fell through, the commandos were given the green light to storm the plane.[10] The rescue operation reportedly lasted for 30 seconds after which, all four hijackers were shot dead.[11] Speaking about the operation, Fred Cheong said:

“We were really quite clear when we went inside there; we knew exactly what to do. You cannot go there and start to think. We go there and do what we train for because there will be that trade-off. You were just there to do the job. Nothing more.”[1]

From 2006 to 2012, Fred Cheong was posted to the Officer Cadet School (OCS) as the commander of Hotel Wing, one of the wings for Army officer cadets.[1] Overseeing a batch of 100 trainees every year, he was known for making each batch do the 1,000 sit-up challenge as a way of overcoming mental barriers.[12] Elaborating on the reasoning behind his actions, he was quoted to have said:

“It was not so much about doing the thing. It was doing what they seemingly were not so sure of doing. Most people after finishing, they still couldn’t believe what they had just done. Because between doing and believing, believing is more difficult.”[1]

Fred Cheong became commander of the OCS Army wing in 2012, holding the appointment until he retired from the Singapore Armed Forces in September 2013.[1]

After retiring from the SAF in 2013, Fred Cheong flew to Dharamsala, India to be initiated as a monk.[5][2] He then became known as Venerable Tenzin Drachom.[13] Drawing on the parallels between being a monk and a soldier, he was quoted to have said the following:

“Both needed great amounts of discipline. One is awareness of the enemy and situation. The other is awareness of negative emotions that cause an unpleasant state of mind prevalent to all.”[1]

In March 2017, Tenzin Drachom was fully ordained as a monk by the Dalai Lama.[2] In the same year, he travelled to a cave in the Himalayas for his first dharma retreat; a tradition amongst monks to meditate for days to attain enlightenment.[14] According to a Channel News Asia article, Tenzin Drachom has also been attending yearly lectures at the Sera Jey Monastery in Mysore, India as part of his learning curriculum as a monk.[1]

As part of an accumulation of merit in Buddhist practices,[15] Venerable Tenzin Drachom has been liberating beings in the form of marine animals since 2000.[16][17][18] In July 2013, Fred Cheong and the ABC liberated 11,000 kg of shellfish (an estimated one million lives) for the Dalai Lama’s birthday.[19] According to the Amitabha Buddhist Centre, Tenzin Drachom liberated one million animals for his teacher, Lama Zopa Rinpoche in 2016.[20]