Forrest Li Xiaodong (李小冬) (born 1977) is the founder and group chief executive officer (CEO) of Sea Limited.[1] Sea was originally an online game developer and publisher named Garena,[2] but Li later branched out to include mobile payments[3] and e-commerce[4] into his company’s scope.

Li was born and raised in Tianjin, China. Details of his parents are sparse, but according to Forbes, they are salary workers who built their careers at state-owned companies.[6] 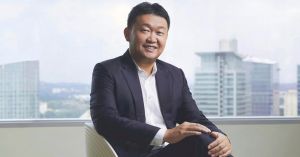 Li first graduated from Shanghai Jiaotong University with a Bachelor of Engineering.[1]

After four year of working as a recruiter for Motorola and Corning in Shanghai, Li took up a $120,000 loan to pursue a Master of Business Administration from Stanford Graduate School of Business.[7] He was one of four students from China in the Class of 2006.

According to Li, the decision to pursue his Masters came about after some self-reflection on his job as a recruiter:

“Every résumé is a personal story, right? So by reading other people's stories, I started to think about how I wanted my résumé to read like in the future. If I kept doing what I was doing, I kind of knew what my résumé would look like five years later. And somehow I didn't feel excited.”[7]

According to Forbes, Li chose to adopt an English name when a college tutor was unable to pronounce his Chinese name Xiaodong.[1] Li chose the name “Forrest” as he was inspired by the character of the same name from the movie Forrest Gump:

“He's not always the smartest person, or the strongest one physically among his peers, but he has a very good heart. Because of his persistence and his courage, he lived a very successful and very meaningful life by helping a lot of other people.”[8]

Li is married to Ma Liqian, whom he met when he pursued his Masters at Stanford.[6] Ma is an investment director with Temasek International.[9]

When Li’s then-girlfriend Ma Liqian graduated from Stanford in 2005, then-Apple CEO Steve Jobs delivered the commencement speech for the class of 2005.[10] Jobs had ended his speech with four words:

These four words served as inspiration for Li to pursue his dreams.[11]

Following his education at Stanford in 2006, Li followed his then-girlfriend Ma Liqian to Singapore.[7] Li’s life in Singapore began with a nine-month stint with MTV Networks’ digital team.

According to Li, he had almost no savings and was saddled with $100,000 of student loan debt when he first entered Singapore. He and his wife could only rent one bedroom in a three-room HDB flat in Braddell as well.[12] 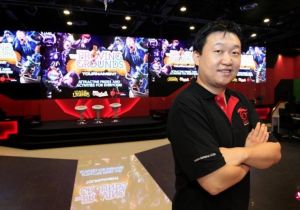 While Li was on his nine-month stint with MTV Networks, he worked on setting up his first enterprise GG Game.[7] This enterprise was not a success, as it focused on developing a single-player gaming product at a time when multiplayer gaming was gaining traction.

The situation did not improve with the 2008 financial downturn, and Li had to shut it down. He was honest with his angel investors about the flop:

“They appreciated the honesty. For angel investors, they bet on people, and they feel that someday you can make something happen.”[7]

Despite his setback with GG Game, Li was able to secure an additional funding of about $1 million.[7] With the funds on hand, Li went on to establish Garena with Gang Ye and David Chen in May 2009.[11]  Gang Ye and David Chen are also from China, groomed by the Singapore government through scholarship programmes.[13] 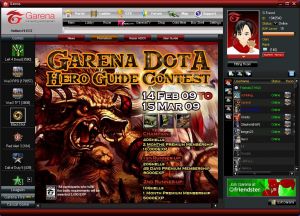 Garena’s interface in 2009. Screenshot from Tech in Asia.

Short for Global Arena, Garena started as a downloadable gaming platform that connected gamers from all over the world together.[14] Available in 10 languages, this platform had three key features:

At the time, Garena was connected to a variety of games, including Left 4 Dead, BlackShot, Call of Duty, and Dota. Within just five months from launch, Garena managed to garner 23 million registered users from 210 countries.[14]

In 2010, Garena got its first publishing break with Riot Games, a USA game developer who had just released multiplayer online battle arena (MOBA) title League of Legends at the time.[7]

After securing League of Legends’ publishing rights in Southeast Asia, Li was able to make Garena profitable in the next two years.[7] Garena then went on to publish more titles, including Changyou.com’s Duke of Mount Deer[15] and Grinding Gear Games’ Path of Exile.[16]

In 2010, Garena+ was launched as a major upgrade for the original client.[17] Garena+ was an integrated client that not just connected gamers, but also served as a platform for players to download games that it published for Southeast Asia. 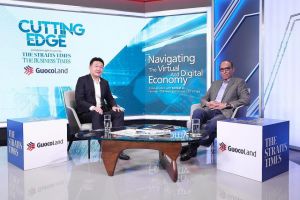 On 23 October 2017, Garena+ was officially retired and replaced with a refurbished Garena client.[18] According to the official announcement, this new client came with slew of new features, such as auto-updates, game repairs, an integrated voice chat, and an in-built bulletin for news and content.

On 19 November 2018, Garena signed a Right of Refusal (ROFR) contract with Tencent Holdings Limited.[19] Under the ROFR contract, Garena was granted the exclusive right to publish Tencent’s mobile and PC games for the next five years in Indonesia, Taiwan, Thailand, the Philippines, Malaysia, and Singapore. Li expressed his optimism of the ROFR:

“As a global leader in the video games industry, Tencent has a portfolio that includes some of the world’s most popular and engaging titles. This arrangement can bring top quality IP to the large and growing games community in our region. We are excited to work with Tencent even more closely together to develop new opportunities in the relevant markets over the long run.”[19]

Garena ventured into game development by collaborating with Vietnamese company 111 Dots Studio[20] to release mobile battle royale Free Fire on 4 December 2017.[21] Free Fire was a hit on release, as it does not require much storage space and is optimised for low- to mid-range devices.

Within two years of its release, Free Fire built a playerbase of more than 350 million, with more than 100 million counted as active in Q4 2018.[22] The game accounted for 44.5% of the $231.4 million revenue that Garena generated within this period.

In 2014, AirPay was launched in Thailand as an e-wallet to simplify online transactions for users of Garena.[23] Thailand was chosen as AirPay’s vantage point because the Thai people were perceived to be more receptive towards new payment methods.

To make AirPay more user-friendly for the 18.3 million Thai gamers, AirPay was split into two platforms: AirPay Counter and the AirPay app.[23]

While the app allowed for mobile payments, AirPay Counter was a more traditional payment option that allowed users to top up their AirPay e-wallets at internet cafes, convenience stores, and mom and pop shops.[23]

In 2016, the virtual prepaid AirPay card was launched to further enhance the convenience of online transactions.[24] This card was released in collaboration with Mastercard and Thanachart Bank.

On 11 July 2019, ShopeePay was launched in Malaysia as an e-wallet to be used on e-commerce platform Shopee.[25] Powered by AirPay, ShopeePay allowed users to instantly pay for their orders on Shopee.

AirPay was rebranded as SeaMoney in 2019 to combine all its financial offerings under one umbrella.[26] 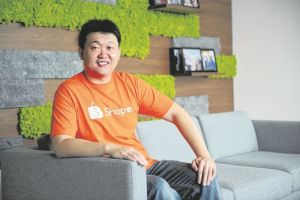 Li in a Shopee T-shirt. Photo from The Straits Times.

In February 2015, Shopee was launched as an online mobile-centric marketplace where users could browse, shop, and sell on their phones.[27] At launch, it was made available in seven markets: Singapore, Indonesia, Malaysia, Thailand, Taiwan, Vietnam, and the Philippines.[28]

On 18 July 2017, Shopee Mall was launched as part of Shopee’s efforts to shift to a business-to-consumer (B2C) model.[29] Shopee Mall is separate from Shopee’s regular marketplace, giving its users access to over 200 name brands like 3M, L’Oreal, Philips, and Adidas. 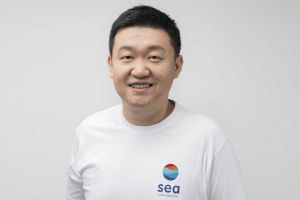 Li photographed in a T-shirt with the Sea logo. Photo from Sea.

On 9 May 2017, Garena rebranded as Sea after it secured $550 million in funding.[30] Under the new brand name, the company tied all three of its arms together: gaming, digital finance, and e-commerce. Li explained the meaning behind the name “Sea”:

“Our new name draws inspiration from the acronym for our region, symbolising our strong 'home court advantage. In addition, the sea connects every one of our markets, symbolising our corporate motto of 'connecting the dots'. Finally, Sea is a humble, authentic word that evokes the pioneering spirit of exploration - a wonderful symbol of our corporate values.”[30]

In January 2020, Sea applied for a digital bank license in Singapore to address the unmet needs of millennials and small and medium-sized enterprises (SMEs).[26] Li believes that Sea is capable of running a digital bank:

“Through Garena, Shopee, and SeaMoney, we have unrivalled insight into the needs and wants of millennials and SMEs across the region. We have also developed exceptional capabilities in addressing these unmet needs, and have the technology, infrastructure, data analytics capabilities, and management experience to design and scale Singapore’s first full digital bank.”[26]

In December 2020, Sea, along with Grab, Singtel, and Ant Group, was awarded a digital bank license by the Monetary Authority of Singapore (MAS).[31] Li was proud to be awarded the license:

“As a proudly home-grown company, we look forward to further contributing to the long-term development of our nation’s digital economy, creating more employment opportunities in Singapore, and empowering our whole community to thrive in the digital era.”[31] 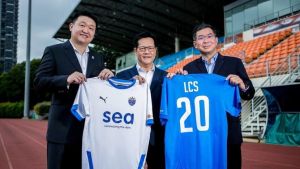 On 14 February 2020, Sea took ownership of local football club Home United and renamed it to Lion City Sailors Football Club.[32] Li was appointed the chairman of the newly rebranded football club. He expressed pride over this acquisition in a press release:

“Sea is proud to be a Singaporean company, and we are proud to play our part in elevating Singapore football to the next level. By uniting with a club with a rich heritage, exceptional fans, and a great organisation, we intend for Lion City Sailors to set a new benchmark for footballing excellence in Singapore and the region.”[32]

While COVID-19 has had a detrimental impact on the world economy, Sea thrived with a market capitalisation value of around $69 billion (accurate as of 19 August 2020) across its three main businesses.[6] 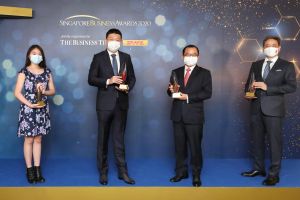 Li receiving the Businessman of the Year award. Photo from The Straits Times.

On 19 August 2021, Free Fall made the news for setting a world record for the largest projected video game display at a Las Vegas event.[34] Here, more than 1.6 million lumens were used to light the side of a building to project live gameplay of Free Fall.

On 25 November 2020, Li was named Businessman of the Year at the 35th Singapore Business Awards (SBA).[12] Li attributed Singapore for helping him win the award:

“Singapore took me in when I was a nobody. I came here with barely any savings, and a hundred thousand dollars in student loan debt. My wife and I could only rent one bedroom in a three-room HDB flat in Braddell. Despite this, the Singaporean community accepted me, for which I will always be grateful. Long before I had any success, they made me feel welcome.”[12]

On 31 August 2021, Li was named the richest person in Singapore by Bloomberg Billionaires Index with a net worth of USD19.8 billion (SGD26.6 billion).[5] This came after Sea’s shares rose by 67% in 2021 alone. On a global scale, Li currently stands as the 101st richest person.