While it was only reported on two occasions in 1967 and 1972, panty-raiding activities were perceived as an annual tradition between the Raffles Hall boys and Eusoff College girls. Opened in 1958, Eusoff College was an all-female hostel on the Bukit Timah campus.[1] Some former Eusoff College residents commented that the raid was a tradition stemming from a ‘battle of the sexes’ mentality on campus. The women mentioned that besides getting tipped off about the raid, they would face the boys head-on with a mix of flour and water bombs as they tried to scale up the slope.[2] More recently in 2008, one of the first residents of Eusoff College remarked fondly on the antics of the Raffles Hall boys during Eusoff's 50th Anniversary reunion visit.[3]

Eusoff College girls pictured in front of their dorms. Photo from UM Memory.

Described as “one of the worst-ever in recent years”, the 1967 Panty Raid earned its notoriety largely for the damage done on Eusoff College. Based on witness reports, the boys snuck in during the early hours of the morning to loot the girls’ undergarments from the laundry room.[4] It was reported that doors and windows were smashed and walls were covered with pornographic words and “clinically accurate, but morally depraved diagrams”.[5] In response, the University of Singapore took action against seventy-five undergraduates who had confessed to their participation. They were suspended from Raffles Hall for three months.[6]

The raid was commented on by then Prime Minister, Mr Lee Kuan Yew, in his National Day Celebrations speech to the Bukit Merah Community Centre. He reiterated that such actions were not condoned in the University before criticising their actions.[7] 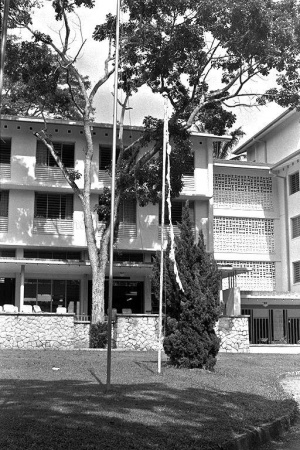 A photograph depicting the aftermath of the panty raid in front of Raffles Hall in 1972. Photo from National Archives Singapore.

On 10 January 1972, The Straits Times published an article on a panty raid conducted the night before. In front of Raffles Hall along Nassim Road, a dozen pair of panties and brasseries believed to be stolen from Eusoff College were strung from a flagpole. This incident prompted a series of reports and opinion pieces that lasted a week.[8]

Two days after the report, the University of Singapore authorities announced that they were conducting private investigations into the raid. The master of Raffles Hall, Dr Lee Soo Ann, and the principal of Eusoff College, Dr Eileen Aw, were reported to be heading the investigations.[9] A university spokesman clarified the university’s intolerance for such behaviour while also denying that panty-raiding was an annual event, citing that the last raid was in 1967.

A local newspaper, the New Nation, published an opinion piece originally written in Sin Chew Jit Poh, a local Chinese-language newspaper. In a strongly-worded article, the writer criticised the undergraduates for “giving vent to their sexual bewilderment” and for regarding panty-raiding and “ragging” as a form of ‘tradition’. Additionally, the writer reprimanded the undergraduates for damaging the reputation of the university and called for tighter disciplinary actions by university authorities.[10]

Residents of Raffles Hall provided their perspectives on the matter. In his letter to The Straits Times, a resident offered his personal views surrounding the raid. The resident argued that the raid was “an outlet for pent-up emotions and feelings of depression” as undergraduates were faced with approaching annual examinations, mounting tensions from “cramming late into the night” and “deprived of the comforts of family life”. He also stated that “no harm was meant, no harm was done” as the Eusoff College girls did not lodge any complaints and had “taken it all in good humour”.[11]

In contrast, the student representative group of Raffles Hall, known as the Junior Common Room Committee, responded to the article in Sin Chew Jit Poh by positing that outsiders could have been responsible for the raid. The group argued that the lack of fences or gates around the university premises, in which Raffles Hall was situated, allowed outsiders to access the university grounds freely. The Committee stated that if the raid had been conducted by the students, the participants would comprise of only “a small group of culprits”.[12]

On 2 February 1972, The Straits Times reported that the University had taken action against some male University of Singapore students. In his brief comment, Dr Lee Soo Ann announced that appropriate action had been taken and the matter was closed.[13]