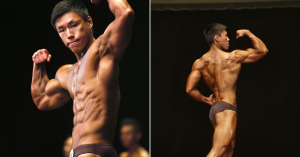 Chin Nian Kang, also known as Dinokang, as a bodybuilder. Photo from Instagram.

Chin Nian Kang (more popularly known by his Instagram moniker ‘Dinokang’) is a Singaporean ex-bodybuilder and freelance personal trainer. He regularly posts in-depth physical training and nutrition advice on his Instagram and YouTube channel. He is also the founder of Lifelong Training University (LTU), an online fitness education platform which offers courses for beginners looking for fitness and nutrition education as well as those looking to become personal trainers.

Nian Kang had studied in Swiss Cottage Secondary School from 2007 - 2010, before moving on to Jurong Junior College, and subsequently the National University of Singapore.[1]

During his National Service, he served as a reconnaissance trooper.[1]

Before becoming a personal trainer, Nian Kang was a bodybuilder, and competed in the  International Bodybuilding Championship organised by the Natural Bodybuilding & Fitness Association of Singapore.[2] He emerged as champion in the under-80kg weight class and placed 3rd overall amongst other international athletes.

Nian Kang is currently a freelance personal trainer. He was previously a trainer under fitness group Ultimate Performance.[2]

He also founded Lifelong Training University, an online fitness and nutrition education platform which offers courses targeted at beginners who want to learn about fitness. The platform offers two levels of the Applied Nutrition & Training in Singapore (ANTS) course, which are 2-hour programmes run on two days.[2]

Nian Kang regularly posts in-depth fitness and nutrition advice on his Instagram profile and YouTube channel. His content includes tips on good form for various exercise movements, nutrition advice for those wanting to lose weight, as well as his opinions on popular fitness personalities and workout formats. He currently has over 31.1k followers on his Instagram, and 2.3k subscribers on his YouTube.[3][4]

Nian Kang is known for adopting a very brazen and frank tone in his content, especially when it comes to debunking commonly-held fitness and nutrition myths. While this has resonated with his followers, it has also caused him to be embroiled in several controversies with other famous personalities.

One of Nian Kang’s most notable controversies involved a legal tussle with notable online fitness personality Chloe Ting. In mid-2020, Nian Kang posted a 62-part Instagram Stories series on his profile, criticising and discrediting videos posted by Chloe.[5] In his posts, he described her as a “public figure and a pretty face in yoga pants”, labelling her work as “fake” and that she “knows nothing about fitness or dieting or lifting or training, but she’s really good at sounding like she does.”[5]

While many of his followers expressed their appreciation for his work, it also drew the ire of Chloe Ting’s followers, who disparaged his work and accused him for riding on Chloe’s popularity to boost his own profile.[6] 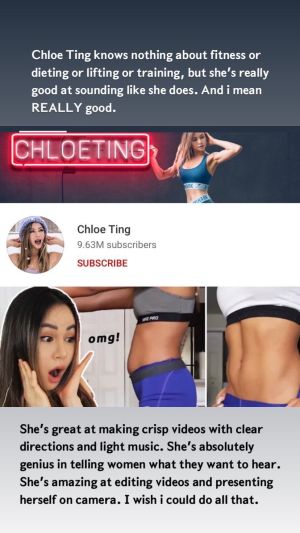 Approximately two months later, Chloe Ting responded to Nian Kang’s posts in a video on her YouTube channel, addressing his criticisms as well as calling it a “malicious campaign against her”.[7] In her video, she did not make any overt identification of Nian Kang, and censored his Instagram profile name in her screenshots.

On 20 January 2021, Nian Kang posted a public apology on his Instagram, stating:

“took several of her videos out of context unnecessarily to suit the narrative of my posts, and purposefully portrayed Chloe from a negative point of view to elevate my profile.”[8]

He has also since deleted all the Instagram Stories referring to Chloe. 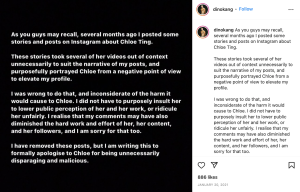 In a video posted on 25 August 2021, Chloe Ting revealed that she was still involved in two legal proceedings, one of which was with Nian Kang over his alleged “smear campaign” against her.[9] According to her, she chose not to insist on monetary compensation for damages, and Nian Kang had taken advantage of her kindness by only posting a public apology much later on and that he had allegedly told her lawyer Chloe’s cause was of no concern to him.[9] 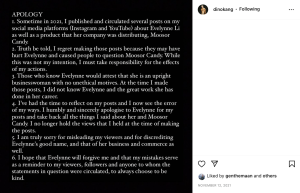 On 12 November 2021, Nian Kang posted a public apology on his Instagram to influencer and microbusiness owner Evelynne Li.[10] In his post, he outlined that he published and circulated several posts discrediting Evelynne and disparaging a slimming product - Moosor Candy - that her company was distributing.

Allegations of being racist 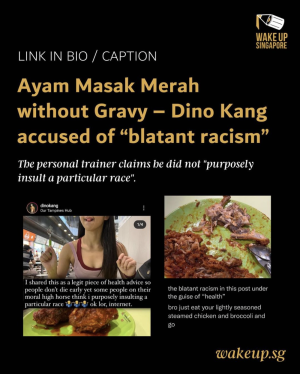 In early-2022, Nian Kang was accused of being racist, following a post he had made on his Instagram on Ayam Masak Merah and how it was unhealthy given the amount of oil, sugar and gravy that came with the dish.[11] His post was picked up by netizens as well as alternative  media outlet Wake Up Singapore, who called him out for his alleged racist overtones in criticising the dish.[12] The incident drew polarising views, with some agreeing that he went overboard with his criticism, while others felt that he was merely stating the obvious and that there was nothing racist about his post given how he has also posted on unhealthy foods from other ethnicities.[12]

On 8 April 2022, Singaporean financial lifestyle blogger Dawn Cher (better known as SG Budget Babe) posted in an Instagram story about how one of her followers had referred her to a video that Nian Kang had posted previously, which criticised and discredited a line of slimming products that she was promoting.[13] 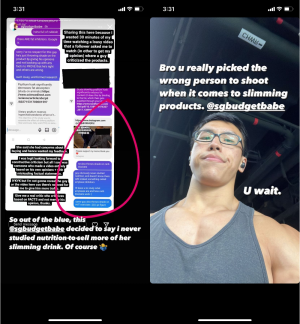 While she did not overly identify or mention Nian Kang, she noted that he had posted a video “entirely based on his own opinions” with “misleading factual statements”, and that he “obviously never studied nutrition”.

Nian Kang has since responded to Dawn’s stories, lambasting her for her accusation that he has no nutrition education and also comprehensively debunking the claims behind slimming products. Dawn has also responded with her own clarifications, and rebutting Nian Kang’s posts. According to her Instagram Stories, she also filed a police report, after an anonymous profile commented on one of her posts with her personal contact number. As of 11 April 2022, the confrontation is still ongoing.[13][3]