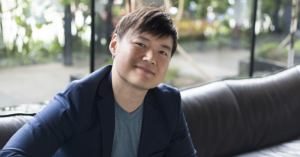 DanielFoodDiary is a Singapore-based food review blog, started by food blogger Daniel Ang in 2011. The blog primarily operates on the domain DanielFoodDiary.com, as well as on various social media platforms.

DanielFoodDiary was started in 2011 by founder and food blogger Daniel Ang.

In 2008, Ang first started blogging about his food experiences on his now-defunct personal blog.[1] After a couple of months of blogging, Singapore Press Holdings approached him to write food reviews for its now-defunct interactive web portal omy.sg.[1] Subsequently, Daniel started DanielFoodDiary.com in 2011. 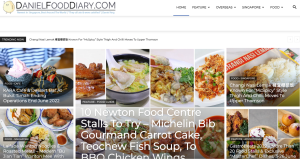 On the side, Daniel is an adjunct corporate trainer at Eagles Mediation and Counselling Centre, as well as an associate mass communication lecturer at various polytechnics.[1] He has also been involved with various radio and television programmes such as Mediacorp Channel U’s “Youth Quest” travelogue and Channel 5’s “The Supper Places”, and participating in various food-related judging panels such as the Singapore Blog Awards and Epicurean Star Award.[2]

Daniel holds a Bachelor of Communication Studies from Nanyang Technological University, and a Masters of Education from Monash University.[3]

As of 3 June 2022, the blog is widely followed across various social media platforms:

According to the blog’s About section, DanielFoodDiary is dedicated to posting reviews of food and dining experiences both in Singapore and internationally.[2] It regularly posts listicles of recommended food items to try at various food & beverage establishments, as well as in-depth reviews of food outlets like cafes, restaurants and hawker stalls. Some of its content, such as its travel and social commentary pieces, have also been featured in international and local media such as the Wall Street Journal, SPH’s Straits Times and MediaCorp lifestyle programmes.[2]

The blog is mostly run by Daniel only, though he has occasionally hired interns to contribute as well.[1]

When it comes to content criteria, Daniel cited that he has two strict ones: they must be new to the market and something he feels his readers will enjoy.[1] Ang said that his decisions on what to feature next are made by looking at current trends and the responses to his posts on social media.

The blog also states that it generally declines media tastings, events and food products.[2] According to Daniel, this was initially because he could not find the time to attend tastings while still committing to publish timely content.[9] In addition, he mentioned how “some food tastings can come across as overly orchestrated, and less authentic”, and that this resulted in an inauthentic experience of the restaurant.[9] In an interview in 2015, Daniel stated that he tries to keep advertorials to a maximum of 10% of content.