Chua Thian Poh (born 11 July 1948) is the founder and Chief Executive Officer of the property development company, Ho Bee Land. He is also a prominent community leader who is recognised for his philanthropy efforts in Singapore.[1][2] In 2004, he was awarded the Public Service Star. A year later, he was appointed Justice of the Peace. Chua Thian Poh has also served as the Non-Resident Ambassador of Singapore to the Republic of Maldives.[3]

Chua Thian Poh is a self-made billionaire who has made his mark in real estate and public service. In 2020, he was ranked on Forbes' billionaires' list with a net worth of S$1.1 billion.[4]

Chua Thian Poh is married to Ng Noi Hinoy with whom he has four children[5][6] - two daughters and two sons.[7][8] The couple's son, Nicholas Chua, was announced as the Deputy Chief Executive Officer of Ho Bee Land in 2018.[9] Their youngest daughter, Chua Weiling, runs the family's Chua Foundation.[10] According to Singapore Tatler, Chua Thian Poh is reportedly a golf enthusiast.[11]

Chua Thian Poh came from a family of 14 children.[10] His mother, Seah Sar, was an immigrant from Fujian, China who came to Singapore after the second world war.[12] After completing his studies at Serangoon Garden Technical Secondary School, Chua Thian Poh entered the workforce.[13] At 16 years old, he joined his father’s production company which made metal hooks and spikes for the logging industry.[14][5] During the 1970s, he ran an import/export business from Jakarta, Indonesia after his father’s company shuttered due to falling timber prices.[13] He stayed in Indonesia for over a decade before returning to Singapore. 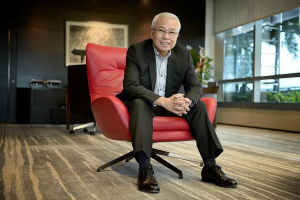 Chua Thian Poh (pictured) is a self-made billionaire with decades of experience in the property sector. Photo from Business Times.

A successful businessman, Chua Thian Poh reportedly made his first million at 21 years old.[15] In 2006, Chua Thian Poh was named the “Businessman of the Year” at the Singapore Business Awards, jointly organised by The Business Times and DHL.[16] According to Singapore Tatler, he was quoted to have said the following:

"I believe in adopting a win-win approach for all of my business dealings. As long as you are fair and reasonable to all your stakeholders, you can run the marathon. No one wants to deal with you if they are always on the losing end."[17]

As of 2020, he is the Chairman and Chief Executive Officer (CEO) of Ho Bee Land. Under his stewardship, Ho Bee Land has expanded its asset portfolio to include properties in cities such as London and Munich.[5][18]

Chua Thian Poh founded Ho Bee Group in 1987 at the age of 39. In 1992, The Straits Times reported that Ho Bee Land made its first large property purchase, having secured a S$40 million deal for an industrial factory.[19] Ho Bee was listed on the Singapore Exchange in 1999.[20][21] That same year, Chua Thian Poh was appointed as the group's Chairman and Chief Executive Officer.[22]

Apart from his achievements in the corporate world, Chua Thian Poh is also a prominent figure in public service. In 2014, he was conferred the Distinguished Service Order at the National Day Awards.[23][24] A prominent leader within the Singapore Chinese community, Chua Thian Poh has served as the honorary president of the Singapore Federation of Chinese Clan Associations as well as the President of the Singapore Hokkien Huay Kuan.[25][26][27] He was also appointed as a member of the Elected Presidency Constitutional Commission by the Prime Minister’s Office in February 2016. In 2017, he was sworn in as a member of the Council of Presidential Advisers (CPA).[28] 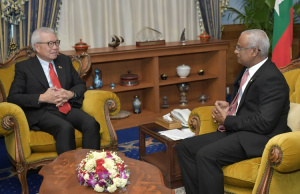 Chua Thian Poh served as Singapore's ambassador to Maldives for four years from August 2015 to 2019.[29] As the ambassador, Chua Thian Poh has contributed to improving bilateral ties between the two countries. In 2017, he was an honoured guest at The Mercure Maldives Kooddoo Hotel's grand opening alongside Maldives' then-president, Abdulla Yameen Abdul Gayoom.[30] 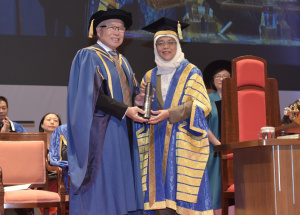 Chua Thian Poh was awarded a Doctor of Letters by NUS in 2019. Photo from source.

Over the years, Chua Thian Poh has been conferred various awards in recognition of his philanthropic contributions to Singaporean causes. In 2012, he was awarded the President’s Award for Philanthropy. In 2019, Chua Thian Poh was also awarded the NUS Honorary Doctor of Letters by Madam President Halimah Yacob for his contributions to local education.[31][32] Speaking at the ceremony, he said the following:

"To me, achieving financial success in life is not everything. It is also important to remain humble and show empathy towards others. Looking back, my years dedicated to community service had certainly been most valuable as I have gained much personal satisfaction and led a more fulfilling life by giving back to our society.”[31]

Chua Thian Poh and his brothers set up the Chua Foundation in 2015 in memoriam of their late mother, Seah Sar who had passed a year earlier.[10] According to the foundation's website, it has five selected beneficiaries as of 2020; ranging from organisations supporting children with special needs to those caring for the elderly.[33]

According to the National University of Singapore, Chua Thian Poh has donated over S$20 million to local higher education causes since 2007.[31] Speaking about the role of young people in society, he said:

“Our society doesn’t just need economic stability, we also need a lot of youngsters coming forward to recognise community work. I think everyone has the heart (to know) how to give back to society. I would like to encourage all people, especially the younger generation, to take the first step.”[23]

In 2011, Chua Thian Poh donated S$5 million to the National University of Singapore (NUS) to kickstart the development of a community leadership programme.[15][34] The programme was inaugurated as the Chua Thian Poh Community Leadership Centre, an academic unit within NUS, in 2017.[35] As of 2019, the centre has reportedly benefitted about 400 NUS undergraduates and over 100 organisations.[31] Chua Thian Poh has also donated S$5 million to Nanyang Technological University (NTU).[36] The school’s Chua Thian Poh Entrepreneurship Education Fund includes a scholarship that benefits entrepreneurs looking to pursue a Master of Science in the Technopreneruship and Innovation Programme.[37][38] As the CEO of Ho Bee Group, he gave S$3 million to Singapore Management University (SMU) to kickstart a Ho Bee Professorship in Chinese Economy and Business in 2008.[36]