Chua Eng Leong (born 1971) is a Singaporean politician and the Executive Director at Standard Chartered Private Bank.[1] He represents the People’s Action Party (PAP) as a non-elected representative in Aljunied GRC.[2] 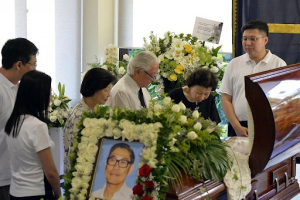 Chua Eng Leong is the son of former cabinet minister Chua Sian Chin, who has held several ministerial positions in his time in office, such as that of Health, Education and Home Affairs.[1][3] Since he was about five or six years old, Eng Leong would follow the older Mr Chua on his community visits during the weekends, which sparked an interest in politics for the younger.[1][4]

Eng Leong attended the Anglo-Chinese School and its affiliated Anglo-Chinese Junior College in his childhood years.[1] He speaks fondly of the experience in these schools till this day, and maintains close contact with many of his peers.[5]

Eng Leong then attended the University of San Francisco, where he graduated with a degree in Business Administration (Management).[1]

Eng Leong is married. He and his wife Alicia, a full-time housewife, have two children.[1]

After graduating from university, Eng Leong started his banking career in 1996.[1] Since then, he has held different positions in a variety of sectors, including retail, private, corporate and investment banking.[1] As of 2015, he is the Executive Director at Standard Chartered Private Bank.[1][6][7]

Despite growing up a minister’s son, Eng Leong did not formally join the PAP until 2001, after the General Election.[1] He held a few entry-level posts from 2001 to 2013, such as that of assistant treasurer of the PAP Community Foundation in Tampines.[1]

The PAP’s historic loss to the Workers’ Party (WP) at Aljunied in the 2011 General Election prompted a mass exodus of their branch’s leadership out of politics.[4] This included former Senior Minister of State for Foreign Affairs, Zainul Abidin Rasheed, who Eng Leong replaced in May 2013 following his departure from the grassroots advisory team and party.[4] Eng Leong was also appointed as the Branch Chairman for the Eunos ward.[4]

Eng Leong has received mixed responses while meeting residents, including a few who have told him to stop “wasting his time” in a WP stronghold.[4] Despite this, he and his team vowed to work for the good of all residents, regardless of whether they voted for the PAP or not.[4]

"At the end of the day, four out of 10 people here voted for the PAP. And even for those six out of 10 who did not, there is no reason why I should not serve them."[4] 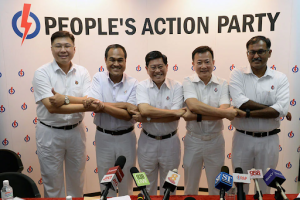 Eng Leong was part of the 5-member team who took up the challenge to win the Aljunied GRC back for the PAP in the 2015 General Election.[1][6] In particular, he conveyed to Today that if he was elected, he would “champion programmes that help the youth-at-risk”.[1]

His team, dubbed the “suicide squad” for going head to head with WP bigwigs while having no anchor minister, were unsurprisingly unsuccessful in their challenge.[6] The PAP eventually lost the GRC by 2,612 votes.[6]

Following the PAP’s second loss at Aljunied, their candidates, including Eng Leong, were made People’s Association (PA) grassroots advisers, as is common practice for defeated PAP candidates.[8] Grassroots advisers typically act as messengers, communicating policies from the government to the people, as well as feedback from their constituents back to the government.[8]

For this election, the PAP team consisted of Eng Leong and his colleagues Victor Lye, Alex Yeo, Chan Hui Yuh and Shamsul Kamar.[7][9] They lost to the WP for the third time in a row, relegating them back to PA grassroots advisers.[7][9][10] 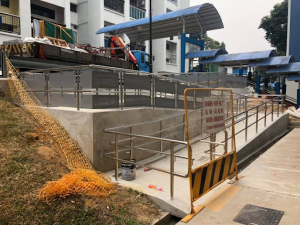 On 15 October 2019, WP’s Secretary-General and MP for Aljunied Pritam Singh called into question the PAP’s “divisive approach to politics”, citing the fact that PA grassroots organisations exist in constituencies run by opposition parties.[11] One example Pritam brought up was the Barrier-Free-Access ramp at Block 108 Bedok Reservoir Road, set to open on 16 October 2019.[11][12] According to him, suggestions for the ramp were brought up in 2012, which meant that it took seven years for the entire process from conceptualisation to installation to be complete.[12]

Eng Leong hit back with his own response four days later, on 19 October 2019, calling Pritam’s claims “unsubstantiated” and criticised him for making “factually incorrect comments”.[13][14] Eng Leong then further clarified that funding for the ramp was secured in September 2016, and construction started in December 2018.[14][15] The reason the ramp took so long to be completed was that the contractors in charge of the project had asked for time extensions.[13][14][16] Eng Leong then ended the post expressing that accountability to their constituents, no matter the party, was the most important.[13]

“Instead of engaging in an online debate, I urge everyone to remember our priority is to our fellow Singaporeans and we should focus on accountability to them and not debate on a completed BFA Ramp, which is but a mere red herring.”[13]

Three hours later, Pritam responded again to Eng Leong’s clarifications. Pritam explained that this issue was a “systemic problem”, and not a personal one against the grassroots advisers.[17] He then questioned if seven-year waits were the norm in PAP-run constituencies, and said that if funding for the ramp was already secured in 2016, then there was no reason for the delay.[14][17] Eng Leong did not respond to this post.