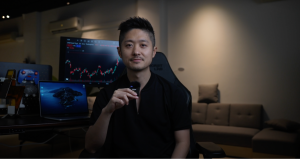 Ken and his sister grew up comfortably, with his mother running her own business and his father working for Singapore Airlines.[3]

According to Ken, he was not academically strong in his younger years. For his PSLE, the only subject he passed was Chinese.

He only passed Chinese for PSLE, and had to repeat his polytechnic course after failing.[4] In an interview with Portfolio Magazine, he also opened up about his wayward behaviour when he was younger, such as shoplifting and gambling away over $10,000 during his tertiary years.[4]

“But through the pains of growing up, the many life lessons I learned, and the love of my family, I learned a very important lesson: You are the average of the people around you. If you mix around with people who complain about life, you will not go very far.

If you mix around with people who want more out of life, who are willing to make sacrifices to attain their goals, you will grow together with them.

I simply stopped doing what an average person does. If you do average things, you will get average results.”

After working in the Civil Service for almost 10 years, he started exploring several workshops and courses along the way to help give him the ability to “break away from the normal corporate world”.[5] At 29, he went for investing courses, spending over $29,000 over three years.[3] During these courses, he met a teacher called Sean who taught him how to value invest using options, which then sparked his journey into options investing.[3]

Apart from the stock market, he also diversifies his portfolio by investing in other asset classes such as private equity and real estate. For the latter, he has two properties in Britain - a terraced house bought in 2014 for $100,000 and an airport carpark.[3] In addition, he invested in private projects such as an infrastructure project that builds sewage pipes and cabling on pieces of land before they are handed over to developers.[4]

Ken is known for being very bullish about Tesla, having invested in the electric car company since 2015.[6]

Ken’s portfolio generates a passive income of six-figures annually, which has made him financially independent.[3] Since then, he cited in an interview how he plans to spend more time helping people and animals in need, such as washing duties at animal shelters and giving talks about investing.[3] He said:

"I can't accept that the lives of animals are at the mercy of humans. A lot of my money goes to animal charities. With additional cash, I also help people in the community. I know I can't do it alone so I train others to learn about financial freedom too, so they can help others."[3] 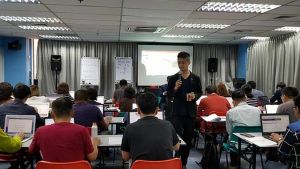 Sometime in late 2016/early 2017, Ken co-founded Options Mastery Programme, which is a programme aimed at teaching investing to people from all walks of life.[7] In the programme, Ken teaches about the Linear Regression Options Strategy (LROS) Cashflow System, which is a system created by him that Ken claims can “generate 2-3% or more easily and safely”.[7]

According to his website, the last Options Mastery Workshop was held on 14 March 2019.[7]

In July 2019, Ken started his YouTube channel Chicken Genius Singapore.[1] He posts weekly videos on various topics related to investing, such as notable financial developments as well as his views on companies such as Tesla. All his videos are generally less than 10 minutes long, and Ken himself does not do any advertisements for products or services on his videos.

To complement his YouTube channel, Ken also has a Twitter account (@pakpakchicken), where he posts content such as his thoughts on finance-related news, snippets from his personal life, and also his analysis on companies.[2] Notably, he also posts updates on his stock market trades.

On 23 March 2022, Ken posted a video on his YouTube stating that he was quitting YouTube.[8] In the video, he mentioned how the personal finance community on YouTube had become very toxic, and that he had received a lot of criticism and hate messages from both the general audience as well as fellow finance YouTubers. In particular, he cited was that there were too many people flaming him for providing bad advice to his followers, alluding to YouTube channels such as Joseph Carlson, Meet Kevin, Financial Education, and Everything Money.[6]

After his video stating that he was quitting YouTube, he has since posted three more minute-long videos, talking about the mid-2022 market crash and recession and his advice for investors.\