Chen Meiguang (1933 - 2020) was a veteran Singaporean actress who was known for her roles in Chinese-language dramas that were televised by Mediacorp’s predecessor, the Singapore Broadcasting Corporation (SBC). In her youth, she was a singer who was recognised for her strong singing voice. During the later parts of her career, Chen Meiguang was a vocal coach to younger artistes such as the Mediacorp actress, Hong Huifang and Jean Yip’s sister, Dawn Yip.[1][2] 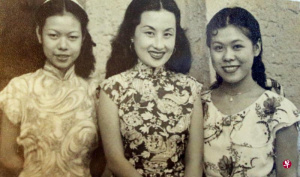 Chen Meiguang was born in Muar, Johor in 1933.[3] She was the second youngest of five siblings and moved to Singapore at 12 years old to work with a relative.[4] Before she was a professional actress, Chen Meiguang was a teenage getai singer. Speaking to New Paper in 1989, she said:

“I have liked operas since I was young. And since acting in an opera for the serial Magic of Dance, I was even more interested.”[5]

She was reportedly known for being a soprano.[6] Chen Meiguang has one son, Huang Yi.

Chen Meiguang passed away in her sleep on 8 November 2020. She was pronounced dead at Sengkang General Hospital after doctors found that she had a cerebral haemorrhage.[2] According to her son, Huang Yi, she had been wheelchair-bound for about six to seven years before her death due to weak joints. Chen Meiguang had also been diagnosed with Alzheimer's.[7] 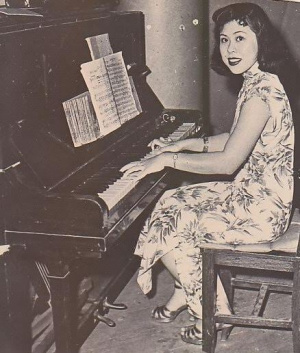 Chen Meiguang was an accomplished performer before becoming an actress. Photo from source.

According to a 1988 news report, Chen Meiguang said that she earned about $1,000 a month as a singer in the 1950s.[8] In the later part of her career, Chen Meiguang became a singing instructor for younger female artistes from the Singapore Broadcasting Corporation (SBC).[1] She was also the vocal coach for the 1979 RTS Chinese Talentime winner, Dawn Yip Pui Fung who she trained every week in the months leading up to the talent show finals.[9] In 1988, Chen Meiguang performed for a live audience at Kallang Theatre as a part of The Artistes Of 1930s-1950s Variety Show.[10] At 74 years old, she performed 'A Little Flower' at the 2007 Star Awards. Chen Meiguang reportedly said the following before singing:

"My health is not like before, but my spirit remains strong. And I still can sing, so let me sing for you now."[11] 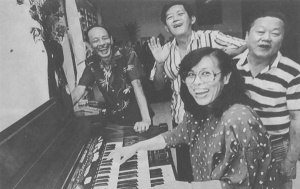 Chen Meiguang in the 1960s. Photo from source.

Chen Meiguang was already active as an actress in 1960s and 1970s.[12][13] According to several news reports, she was comfortable in comedic roles; having had experience in comedy skits and sketches. Chen Meiguang joined the Singapore Broadcasting Corporation (SBC) in the early 1980s as a full-time veteran artiste.[14] Then in her 50s, Chen Meiguang mostly played supporting elderly characters in Chinese-language television dramas. She left SBC in 1998 due to health reasons.[7]

As a veteran actress, Chen Meiguang has acted alongside younger artistes such as Pan Ling Ling, Chew Chor Meng, Hong Hui Fang and Zoe Tay.[11][15][16] The following is a non-exhaustive list of her television appearances over the years in SBC.

In 2015, Chen Meiguang played a leading role in a six-minute short film as the elderly mother of a successful businessman.[20] She was over 80 years old at the time of the film's release.