Chaly Mah (born 24 March 1956) is the current chairman of the Singapore Tourism Board and the Singapore Accountancy Commission.[1][2] As of 1 January 2021, Chaly Mah has succeeded Surbana Jurong founding chairman Liew Mun Leong as the state-owned infrastructure consultancy firm’s chairman, after the latter resigned in September 2020.[3]

Chaly Mah is an alumnus of the University of Melbourne, graduating from the university with a Bachelor of Commerce in 1977.[5][6] According to his profile on Netlink NBN Trust’s website, Chaly Mah qualified as a chartered accountant under the Institute of Chartered Accountants in Australia in 1981.[5]

According to a statement released by the Ministry of Foreign Affairs, Chaly Mah is married to Penny Khong with two sons.[4]

As of December 2020, Chaly Mah is also the chairman of companies such as the Singapore Tourism Board, fibre infrastructure firm Netlink NBN Trust (formerly OpenNet) and the Singapore Accountancy Commission.[5] As of 1 January 2021, Chaly Mah has taken over as the chairman of infrastructure and urban development consultancy firm Surbana Jurong, succeeding founding chairman Liew Mun Leong.[7]

Singapore Tourism Board (2017 to current)

In January 2017, the Singapore Tourism Board (STB) announced that Chaly Mah would be taking over Chew Choon Seng as the chairman of the state-owned firm.[8]

Due to the COVID-19 travel restrictions imposed by the government in 2020, STB launched the SingapoRediscovers campaign in July 2020 to encourage locals to spend on tourism-related attractions such as hotels and restaurants.[9] In an interview with CNBC, Chaly Mah said the following about the campaign:

“The idea there is to have Singaporeans and local residents visit some of our local tourist spots and rediscover Singapore. For us to have an authentic experience for our tourists in Singapore, we must have our own Singaporeans experiencing some of these local attractions so they can tell an authentic story when they relate it to the tourists.”[9]

Since July 2017, Chaly Mah has been the chairman of Netlink Nationwide Broadband Network Trust (NBN) Trust, Singapore’s nationwide fibre network provider.[10] He is also an independent director on Netlink’s board of directors.[11] In Netlink NBN Trust’s annual report in the financial year of 2020, Chaly Mah reportedly received a remuneration of over $200,000 as a director of the firm.[11]

In August 2010, Chaly Mah was appointed as the chairman for the Singapore Land Authority (SLA).[12] During his tenure, Chaly was instrumental in helping SLA tender unused land such as spaces along the Bukit Timah and Tanjong Pagar railway stations, as well as further incorporating the use of geospatial technology.[13] Chaly Mah officially stepped down as SLA’s chairman at the end of July 2014.[13] 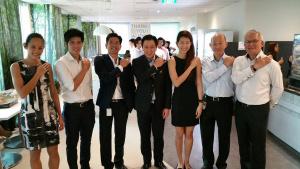 In 1985, Chaly Mah began working as an auditor for UK-based auditing and financial services firm Deloitte, and joined its Singapore branch in 1991.[14] From 2006 to May 2016, Chaly served as the CEO of Deloitte Southeast Asia.[5][14] Under his leadership, Deloitte stated that Chaly was integral to the formation of Deloitte’s Southeast Asia division as well as for expanding the firm’s services to Cambodia, Laos and Myanmar.[14] From 2007 to 2015, Chaly Mah was also the CEO of Deloitte Asia Pacific.[5][14] In a statement released on Deloitte’s website, Chaly was quoted as having said the following about his retirement:

“It has been an honour and a privilege to serve as the Deloitte Southeast Asia CEO for the past 10 years. I am really proud to have worked alongside so many highly talented people during my career with the firm and I would like to thank all our clients and friends for their strong support and trust in Deloitte.”[14] 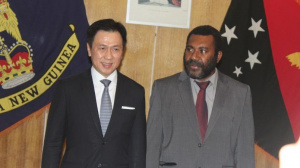 Chaly Mah pictured with the Governor-General of Papua New Guinea at a credential presentation ceremony in 2015.

Besides his key roles in corporate organisations, Chaly Mah also serves on the National University of Singapore’s Board of Trustees.[15] For his contributions to Singapore’s economy, Chaly Mah was conferred the Public Service Medal by the Singapore government in 2014.[16]

Chaly Mah pictured with the Governor-General of Papua New Guinea at a credential presentation ceremony in 2015. Link: https://www.looppng.com/content/new-singapore-ambassador-png

The following is a non-exhaustive list of the board appointments Chaly Mah has held over the years.