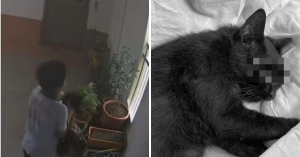 A Boon Lay community cat, affectionately known as Panther by the residents, was found dead near Block 186 Boon Lay Avenue.[1] Panther died from an unnatural cause and was discovered to be due to the impact of falling from a height.[1] This case sparked off many citizens’ fury as the perpetrator is a minor and has not been arrested nor taken into custody as of 21 December 2022.[1]

On the 14 December 2022, Umi Solikati, 39 year-old, Boon Lay resident had reportedly found their community cat, Panther, dead near Block 186 Boon Lay Avenue around 2pm, according to The Straits Times.[1] It was later revealed that the cat had been thrown off the 22nd floor of a Block in Boon Lay. The perpetrator was a 10 year old boy.[2]

Upon confrontation, the boy in question initially denied his actions. He later confessed to this act on further questioning.[2][3] The boy has said that he did it as he "did not receive love and care from his family".[3]

Chan Mui Mui, 49, another Boon Lay resident who regularly fed the cats, had told Straits Times that Panther’s death wasn’t an outlying incident and that there had been 5 cats thrown off the same block in the past 2 to 3 years.[1]

A 1-minute video of the incident taking place circulated on the internet on Thursday.[1] There has been a heated debate on whether or not the boy should receive legal punishment for his actions as a minor.[2]

A Change.org Petition seeking Justice for Panther was created shortly after the video was posted by Nadya Im to bring the issue to the attention of Mr K Shanmugam, Minister for Home Affairs and Minister for Law.[4] As of December 2022, over 69,144 signatures have been collected.[4]

On 16 December 2022, a Reddit thread was also created in the community r/askSingapore discussing whether or not the boy or his guardians should be the ones responsible for his actions.[5] Majority of the users who commented pushed for punishing stating that perpetrator "knew what he was doing”, with some raising concerns about his actions and the link to psychopathy.[5] 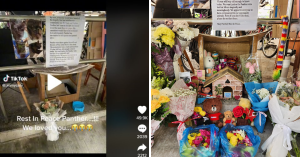 Many visited the memorial subsequently and it was soon filled with flowers, canned cat food and stuffed animals.[7]