Bertha Henson is a Singaporean blogger and a published author. She worked at the Singapore Press Holdings for 26 years where she was primarily an editor for the English newspaper, The Straits Times.[1] Bertha Henson was also the founder of the socio-political commentary websites, The Middle Ground and Breakfast Network that ceased operations in 2017 and 2013 respectively.[2][3] At the time of writing, she runs a personal blog called Bertha Harian. She is also a lecturer in the Communications and New Media (CNM) department at the National University of Singapore (NUS) and an Associate Fellow at the university's Tembusu College.[4][5][6]

Bertha Henson is a Eurasian Singaporean with Chinese-Peranakan and Dutch ancestry.[7] She attended Tanjong Katong Girls' School and subsequently, Temasek Junior College.[8][9] Bertha Henson then enrolled in the National University of Singapore where she graduated with a Bachelor of Arts and Social Sciences.[6] 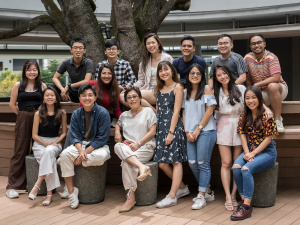 Bertha Henson (seated third from left) with her students in NUS. Photo from source.

Bertha began her professional career as a journalist at the Singapore Press Holdings before leaving mainstream news to set up her own brand of websites. Although two of her socio-political websites have since shut down, Bertha Henson is still active on her personal blog where she writes commentaries about current affairs in Singapore. In recent years, she has authored several commentary pieces for news sites such as Yahoo! News Singapores[10][11] and TODAY.[12] Bertha Henson is also an Associate Professor of Practice and lecturer at the National University of Singapore (NUS).[13][14][15]

Bertha Henson launched The Middle Ground with co-founder, Daniel Yap in June 2015. The website was registered under the Broadcasting Act's class licensing scheme in 2015 and provided alternative coverage of the 2015 Singapore General Elections.[16][17] Speaking about The Middle Ground's contribution to professional journalism, she said:

"When we publish on our site, to ensure that the standards are there - I'm very tough when it comes to that point. No bending of the truth, try and source things... In that way, hopefully people will start realising that these practices are something that should be followed in the online world... I've always said that I want to be the mainstream online, I don't have to be The Straits Times online."[18]

In 2016, the website received a warning from the Singapore Police Force for publishing the results of an election survey during the Bukit Batok by-election campaign period which began in late April and ended in early May.[19] This was a punishable offence under the Parliamentary Elections Act. The Middle Ground shut down in 2017 after failing to raise enough funds on Patreon for its operations in the coming year.[2][20] According to a report by Mumbrella Asia, the website had been operating on reader donations that amounted to about $3,000 a month.[21] 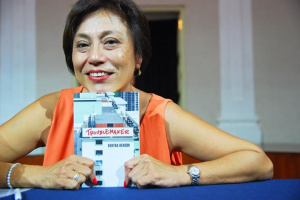 "I started blogging the day I became unemployed... I've always been asked if I can keep journalism practices in the new media; it's very tough because online journalism is such a two-string thing. You don't have layers of checks, you [also] lack the resources to verify facts. What I do now that I have Breakfast Network is I rely on mainstream media as my source, because they have professional fact-checkers."[23]

In November 2013, the Media Development Authority (MDA) requested the website to apply for a publishing license by December 2013.[24][25] Bertha Henson did not submit the application and temporarily shuttered the website before rebranding it as The Middle Ground.[26]

"I left The Straits Times because there was going to be a change in leadership and I wasn't so sure that I could work under the new leader (Warren Fernandez). So I thought I should get out while the going is good and that's what I did."[18]

The following is a list of titles that Bertha Henson has authored.