Arrif Ziaudeen is a Singaporean entrepreneur who is the co-founder and Chief Executive Officer of Chope. Along with two friends, Arrif co-founded Chope on 15 June 2011 upon realising that an online restaurant booking platform did not exist. In 2019, Chope operates in 8 cities across Asia and their services are used by more than 4,000 restaurants. Arrif is the principal figure running the business while the other two co-founders are shareholders.[1]

Arrif Ziaudeen was born to an Indian father and a Chinese mother. In a 2016 interview with The Straits Times, he shared that his mixed heritage influenced the variety of cuisines he consumed daily as a child.[2] At 14-years-old, Arrif moved to the UK to further his studies.[3] He then pursued a law degree at King’s College London in 2002.[4]

After graduating from King's College London in 2005, Arrif joined Bain & Company as a strategy advisor.[5] At the time, he moved to San Francisco for the job. After three years in the legal profession, he embarked on a full-time Masters of Business Administration (MBA) at Stanford University. He graduated in 2010 and joined Principia Management, a private equity company based in Indonesia, as an Investment Professional.[6] 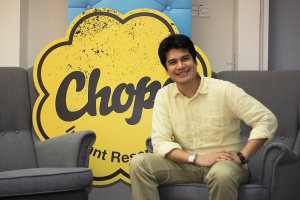 Arrif (foreground) pictured with the Chope logo. Photo from Chope. 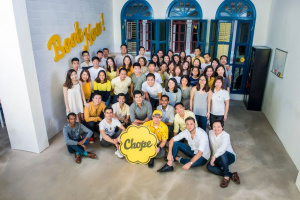 The Chope team at their Purvis Street office in 2017. Photo from Glassdoor. 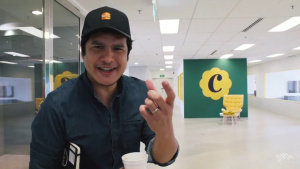 In 2019, Arrif was featured in a YouTube video where he gave a tour of Chope's new office at Shaw Towers.

The idea of an online restaurant booking platform came about when Arrif realised that people were still making restaurant reservations via phone calls. One of the co-founders suggested the name “Chope” and Arrif bought the internet address www.chope.co for S$12 soon after.[7] Chope started as a side-project where Arrif and his friends approached restaurants in Singapore to propose their idea in their spare time. At the time, Arrif was working at Principia Management. With about 20 restaurants on board with the idea of Chope, he decided to devote more time to the venture.[8]

Arrif quit his full-time job at Principia Management four months after setting up the site. At 29 years old, he was the co-founder of Chope. He contributed a five-figure sum to set up the business.[9]

Chope’s first office was in an apartment after which they relocated to Orchard Towers. They then moved to a shophouse at Tiong Bahru and then to another at Purvis Street. In September 2018, Chope moved to an office space in Shaw Towers where it occupies an entire floor.[10]

In the initial days of Chope, Arrif and his small team had to review all the restaurants themselves. That included going to restaurants for meals, taking pictures of the food and conceptualising the information to be published on the Chope website. In their first week, they only sat 12 customers.[11]

The team also proposed a table management system which Arrif described as a “fancy Excel spreadsheet”.[12] Initially, the system did not take off and 6 of the 9 restaurants working with Chope backed out of the project. Despite initial rejection, the improved version of the system developed into ChopeBook. With the system, restaurants can manage online and offline reservations. Chope offers several other management services for restaurants such as:[13]

At the start, the Chope team had to train restaurant staff to use the online reservation management systems.[14]

In 2012, Arrif pushed for the creation of a mobile version of the website after noticing that mobile usage is on the rise. He also launched the first mobile application for Chope. The initial app was powered by Burpple, a social food journal startup which designed and developed the application. The application features 130 restaurants for users to choose from. The application utilised features like location finders and restaurant recommendations from the Chope team.[15]

After Chope took off, Arrif focused his efforts on expanding on the brand's restaurant base. In 2014, Chope partnered with Ringier China to roll out its services to the thousands of restaurants listed on Ringier’s online lifestyle guide, City Weekend.[16] In 2019, Chope partnered with China-based lifestyle service giant Meituan-Dianping to offer Chinese tourists a more convenient way of booking Chope restaurants.[17]