Annabelle Kwok (born 1993) is the founder and chief executive officer of artificial intelligence (AI) start-up NeuralBay and the head of data and analytics at Prudential Corporation Asia.[1][2] For her

contributions to technology and her success as a female entrepreneur, Annabelle was the recipient of the Her World Young Woman Achiever Award in December 2019.[3]

Annabelle Kwok was born in 1993.[2] Annabelle’s parents both work in the financial industry, and she has an older sibling.[3]

From 2007 to 2010, Annabelle Kwok studied at Temasek Junior College (TJC) where she graduated with her GCE Advanced (‘A’) Levels certificate.[1] While in secondary school, Annabelle underwent the Integrated Programme, allowing her to bypass the GCE Ordinary (‘O’) Levels examinations and proceed straight to her ‘A’ Levels in TJC.[1][4]

From 2011 to 2014, Annabelle studied at Nanyang Technological University where she graduated with her Bachelor’s degree, majoring in applied mathematics and a minor in entrepreneurship.[1][5]

During her time spent in TJC, Annabelle Kwok studied software programming.[3] After graduating from NTU, she furthered her interest in technology by creating her own processor and participating in hackathons, eventually winning the 2015 IoT Hackathon which was organised by A*Star.[3][6]

From 2014 to 2015, Annabelle Kwok was the chief operating partner of talent recruitment firm Glints, helping to drive business growth and connect fresh graduates to job opportunities.[1] From 2015 to 2016, Annabelle worked at e-commerce platform Shopee Singapore as its offline community manager.[1] She founded the offline community department at Shopee, and was in charge of identifying communities with high purchase volumes and building rapport with them.[7][1] 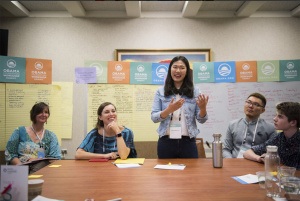 Annabelle Kwok speaking at an Obama Foundation conference in 2019.

Since January 2020, Annabelle Kwok has been the director of artificial intelligence for the AI Center of Excellence at Prudential Corporation Asia.[1][8] As the director of regional AI, she leads a regional team of programmers to engineer and optimise Prudential’s products.[8]

In a 2020 interview with news site Singapore Global Network, Annabelle was quoted as having said the following about her role in Prudential:

“There is laser-focus on understanding, listening and fulfilling the customers’ needs and wants. This is something I am bringing with me as I move into a larger organisation – to continue leading with a passion to serve the needs of others and of course, along the way, inspiring change within the industry.”[8]

In October 2020, Annabelle began her role as the head of data and analytics at Prudential, concurrent with being the director of regional AI.[1]

In October 2017, Annabelle Kwok founded NeuralBay, an artificial intelligence company which develops vision analytics software for companies such as Changi Airport Group and the Ferrero Group.[5][9] According to its description on LinkedIn, NeuralBay has suite programs such as security analytics which assist with the visual recognition of humans, foreign objects and even improper attire.[10]

Speaking to The New Paper about NeuralBay, Annabelle said the following:

“Technology is often expensive and out of reach for people who actually need it. I think giving back to society is about sharing knowledge and skills, so with NeuralBay we hope to make AI affordable and accessible for everyone."[5]

As part of her vision for making AI software affordable to small medium enterprises (SMEs), Annabelle recycles the software programs built for large companies and sells them to the smaller companies at a reduced cost.[3]

As of January 2021, according to NeuralBay’s website, its team has since joined the Prudential Corporation.[11]

In March 2016, Annabelle Kwok founded SmartCow, an AI firm specialising in hardware products.[1][12] She created Tera, a hardware board that could operate AI software which was then used to track movements of rats in Singapore’s sewage system.[13] Annabelle left SmartCow in October 2017 to start NeuralBay.[1]

In a 2017 interview with digital magazine High Net Worth, Annabelle said the following:

“At SmartCow, we would get a lot of requests from people who think our AI system is really great, and want to know how they can implement it in their businesses or buildings. But they hesitate after finding out that the costs of AI can be prohibitively high. AI is supposed to be a disruptive technology, meant to bring about positive changes. What I’m going to do in the new company is closer to what I want to achieve, which is to make AI more affordable and easy to use.”[9] 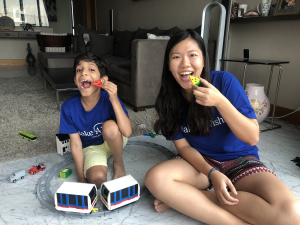 Annabelle Kwok with a child from the Make-A-Wish Foundation in 2018.

Besides being an entrepreneur, Annabelle Kwok has participated in volunteer work with organisations such as Girl Guides Singapore and AIESEC.[1] As part of the Girl Guides, Annabelle travelled to Phuket, Thailand in 2005 as an orphanage support worker to assist tsunami victims during the 2004 Indian Ocean earthquake.[3][1] In 2013, Annabelle embarked on a six-week solo trip to Togo in West Africa to help women create more sustainable businesses.[1]

Speaking to Channel News Asia in a 2019 interview, she was quoted as having said the following about the experience:

“During my stay, it was hard to ignore the state of health among the locals, who were suffering from malaria, HIV and drug abuse. This led me to take on health issues such as teaching HIV prevention to villagers. I experience a very strong sense of joy in giving, and it’s a very long-lasting feeling. I hope that more young people can experience the same.”[14]

Due to her success as an entrepreneur, Annabelle Kwok has been featured by major media publications. The following is a non-exhaustive list of her media features over the years.