Aiken Chia (born 18 April 1989) is an online personality and independent content creator that had previously worked with Night Owl Cinematics (NOC) as a partner, video producer, and talent.[1] In 2013, he was the winner of 987FM’s TV Star competition.[2] Two years later, he emerged as the first runner-up for the reality television hosting competition, The 5 Search. As of May 2022, Aiken has over 86,500 followers on Instagram. He also has over 6,600 followers on his YouTube channel, AIKEN CHIA.[3] 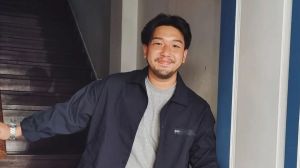 Aiken is forthcoming about his background on his social media platforms. He has spoken about his life experiences on his public Instagram profile, NOC's YouTube channel, and on the The Daily Ketchup Podcast.[4]

Aiken grew up in a low-income and single-parent household where he was raised by his mother.[5] In a video titled 'My Biggest Regret', Aiken shared that their electricity got cut occasionally because they could not afford to pay the bills.[6] During his teenage years, Aiken fell in the wrong company which resulted in a police case when he was 14 years old.[7] After the incident, he completed his secondary education while also serving as a singer during the school’s chapel sessions.[8]

Aiken went to Saint Hilda’s Secondary School.[9] For his GCE 'O' Levels, he registered as a private candidate for Pure Literature for which he received an A2 grade.[10] He then enrolled in Temasek Polytechnic where he studied Psychology. Aiken furthered his studies in Psychology at the Singapore Institute of Management (SIM) under the University of Wollongong.[11] He graduated in 2017 with a degree in Applied Science (Psychology).

In an Instagram post from 2017, Aiken shared that he was a customer service officer at Changi Airport before entering show business in 2010.[12] 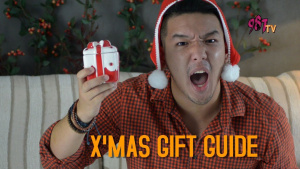 Aiken pictured in 2013 as the host for 987TV's Wacky Wednesdays with Aiken. Photo from video.

In 2013, Aiken won the 987TV Star competition, earning him screen time on 987FM's YouTube channel. The following table lists the details of his YouTube shows while working at the radio station.

Aiken's first show, 'Wacky Wednesdays with Aiken' debuted in August 2013 with an episode about "things that Singaporeans won't say".[13] His second show which he hosted jointly with Kimberly Wang debuted in September 2014.[14] 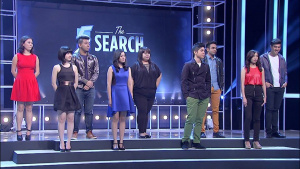 Aiken (third from left) pictured on the set of The 5 Search (2015). Photo from Facebook.

At 25 years old, Aiken joined The 5 Search as one of the show's fifteen contestants.[15] The winner of the talent search stood to win a S$30,000 cash prize and a two-year management contract with MediaCorp.[16] Although he made it to the finals,[17] fellow contestant Kayly emerged as the winner of the competition.[18]

Following his success in The 5 Search, Aiken appeared in several MediaCorp productions. These shows are listed in the table below. 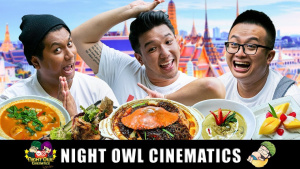 Aiken (middle) is one of the hosts for Food King, a show on the Ryan Sylvia YouTube channel. Photo from video.

Aiken joined the NOC team in 2017.[24] His debut appearance on the Ryan Sylvia YouTube channel was in February 2017 in the first episode of 'Food King'.[25] To date, 'Food King' has had three successful seasons with over 120 episodes.[26][27][28] 'Food King' also has an Instagram page with over 100,000 followers as of June 2020. Apart from directing and hosting the series, Aiken has also acted in a few of NOC's comedy sketches and short films. The table below lists some of his appearances over the years.

On 7 October 2021, an anonymous Instagram account sgcickenrice uploaded several posts of Night Owl Cinematics co-founder, Sylvia Chan, allegedly insulting one of their talents, Samantha Tan.[29] Sylvia has issued a lawyer’s letter against the anonymous account detailing the series of allegations made by the account against her.[30]

One of the claims made against Sylvia as stated in the lawyer’s letter has singled out Aiken as being passive while Sylvia was allegedly bullying employees.[30] In a series of WhatsApp screenshots, Aiken also allegedly allowed Sylvia to scold a producer for a mistake that he made, before stepping in and admitting his fault.[31]

Samantha Tan vouched for Aiken’s kindness, stating that Aiken had prayed for her when she experienced anxiety during one of her shoots.[32]

Following this incident, Aiken has since resigned from NOC and Food King to become an independent content creator.[4][23] 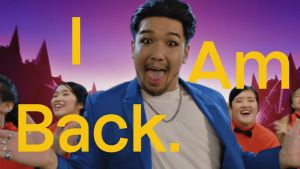 Aiken Chia's "How Are You Welcome To Aiken!" music video. Photo from YouTube.

On 20 May 2022, Aiken launched his very own YouTube channel, AIKEN CHIA. Following that, he also uploaded his first video titled, "How Are You Welcome to Aiken!", a music video adapted from Pamela Bowden's How Are You.[33] As of August 2022, the video has garnered over 106,293 views.

In 2013, Aiken co-produced six acoustic tracks for an extended play (EP) album titled UNTIE/UNITE. The proceeds from the EP, which amounted to S$17,000, were donated to the less fortunate children in Nepal.[34] In 2017, Aiken vlogged about his trip to Nepal with his mother where they visited the children's home.[35]