Adelyn Koh (born 1 October 2001) is a Singaporean singer-songwriter.[1][2] She has performed at numerous live events including the President’s Star Charity show. Alongside ShiGGa Shay and Danial Bawthan (Wheelsmith), she was the main voice for 'Fire In The Rain', a song that was collaboratively executed for the See True Me campaign by the National Council of Social Service (NCSS).[3] 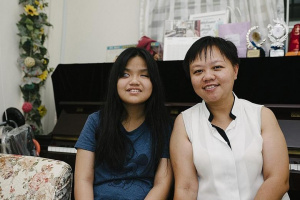 Adelyn Koh with her mother in 2018. Photo credit to Alvin Ho/ TNP Photo.

Adelyn Koh was born on 1 October 2001 with Peters’ anomaly, a rare congenital eye disease where one’s corneas are thinned and clouded, resulting in near-blindness.[4][2][5] As of 2020, she has undergone ten surgeries to correct her medical condition, four of which were done before she turned a year old, but none of them has been completely successful.[1][4] Although near-blind, Adelyn can discern colours, lights and shadows.[6] The oldest of three siblings, Adelyn and her sisters live with their mother, Mary Lim, who is self-employed and separated from the children's father.[1][4]

Adelyn attended Lighthouse School, formerly known as Singapore School for the Visually Handicapped, for her primary education.[7][8] She was also a student at Ahmad Ibrahim Secondary School from 2013 to 2016, where she took her GCE Normal (‘N’) Level exams and graduated.[9] Adelyn then studied at the Institute of Technical Education (ITE) College East from 2018 to 2020, graduating with a Nitec (national ITE certificate) in Web Applications.[6] 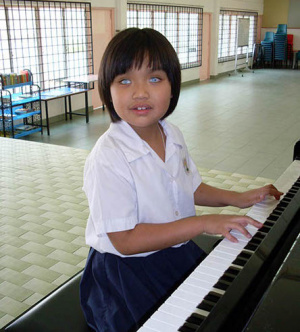 Adelyn Koh learned to play the piano at three years old.[3] She then learnt how to sing and play the keyboard in primary school.[1] In secondary school, Adelyn became more invested in singing when she joined the school choir, using music as a way to deal with the bullying that she faced.[3] In an interview with The Pride by the Singapore Kindness Movement, Adelyn shared her about experience joining the choir in secondary school:

“People have the tendency to reject or exclude those with disabilities. They assume we can’t do things without giving us a chance to show what we are capable of. But being in choir allowed me to train my singing and feel like I’m a part of something I love; it made me feel more included in everyday life.”[1]

To date, Adelyn has released two albums. She released her first album in 2012 and the second in 2015.

In 2012, Adelyn released a CD album titled Little Dream. It was composed of four songs that she wrote to raise funds for her corneal transplant surgery. According to a 2012 AsiaOne article, she had sold 1,000 copies at the time of writing, which equated to $20,000 raised for her operation.[4]

Adelyn composed and released her second album titled I Can See in 2015. According to Adelyn’s mother, who authored a post commemorating the album release on her daughter’s blog, the song 'I See It!' described Adelyn’s feelings the moment she could see raindrops one night after a temporarily successful eye operation.[10] 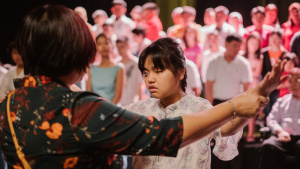 Adelyn behind the scenes of 'Fire in the Rain'. Photo credit to Isabelle Lim/ The Pride.

Aside from releasing her albums, Adelyn has also collaborated with the National Council of Social Services (NCSS) to release a music video for their See True Me disability inclusion campaign in 2019.[3] Adelyn was featured as the lead singer for 'Fire In The Rain', which also featured other handicapped performers such as Danial Bawthan (aka Wheelsmith) and a hearing-impaired hip-hop dance group, Redeafination. Directed by Royston Tan with original music composed by Don Richmond, the video has received over 54,000 views on YouTube as of September 2020.[11]

At nine years old, Adelyn was selected to perform at the President’s Star Charity, an annual charity show to raise funds for selected beneficiaries.[12] She performed a duet with fellow Singaporean musician, Sezairi Sezali.[13]

In October 2017, Adelyn was one of the performers at Sunburst, a fundraising concert organised by The Business Times for the Muscular Dystrophy Association of Singapore (MDAS) and the School of The Arts Student Assistance Fund (SOTA SAF).[14] She played the piano and sang 'Imagine' by John Lennon.[15]

In August 2019, Adelyn performed at the Blue Charity Gala, an event supporting the SPD (formerly Society of the Physically Disabled) and the Business Times Budding Artists Fund (BT BAF). The gala was attended by Deputy Prime Minister and Finance Minister Heng Swee Keat.[16] 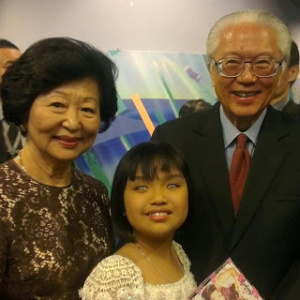 Adelyn Koh with then-president Tony Tan and his wife, Mary at the 2012 PSC. Photo from source.

At ten years old, Adelyn appeared as a co-host alongside veteran television personalities, Soo Kui Jien, Gurmit Singh and news anchor, Glenda Chong.[17] According to a news report by AsiaOne, Adelyn had also performed classical piano pieces on the show.[18]

“I’m not nervous at all. I’m just glad to be doing it again, because the whole point of the President’s Star Charity is to raise funds for the needy and I’m more than happy to be part of this.”[12]

In 2015, Adelyn appeared as a speaker at the National Young Leaders’ Day (NYLD), a nationwide conference featuring inspiring youths from various fields.[20] During her segment, Adelyn shared her aspirations and her thought process, having gone through multiple corneal transplants. She said:

“I tell myself that it will all be okay and that however discomfort (sic) you’re feeling now, it’s only a day or something like that. The thought that it’s only lasting a day is a comforting thought. So I would try to tell myself not to give up, it’s just now, now you’re feeling it, but it will get better.”[21]