Adele Tan Qian Xiu (born 1999) is a Singaporean air rifle shooter from the Singapore Shooting Association.[1] She is best known for representing Singapore in the H&N Cup in 2020, where she won a gold medal in the women’s 10m air rifle event with a score of 632.5 points.[2]

From 2015-2019, Tan pursued an International Baccalaureate Diploma Programme at the Singapore Sports School.[5] Although she has graduated from the school, she continues to train on its premises.

At present, she is an undergraduate at the National University of Singapore (NUS), where she is majoring in psychology.[5]

Tan is also known to have a gift for piano.[6] However, at 18 years old, she had to choose between piano or air rifling. She ultimately choose air rifling over piano as her love for the sport compelled her not to quit:

“It’s just that the passion is shooting. It’s like, I can’t quit. Something tells me I can’t quit because I love it too much. It’s more of an intrinsic kind of motivation. I really enjoy when I pull the trigger, that kind of satisfaction.”[6]

Tan is inspired by American shooter Matthew Emmons.[6] Despite being a gold medalist, he is infamous for the errors he made throughout his air rifling career. In Athens 2004, for example, despite starting off on a strong note in the 50m rifle three-position final, he scored zero points in his last shot as he had fired at a rival’s target.

Regardless, Tan admires him because he is a paragon of resilience in her eyes:

“I think what was special about Emmons, despite his blunders, not just once but so many times, [was that] he is still able to tell the press his story so bravely. It just shows me resilience.”[6] 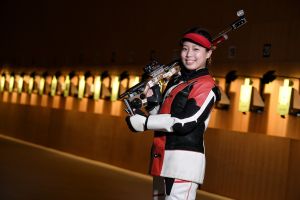 Adele Tan primed for the Tokyo Olympics. Photo by The Straits Times.

Tan has been involved in competitive air rifling since 2012.[1] As of July 2021, she has made her mark on the international stage with two bronze medals at the Philippines Southeast Asian Games 2019[7] and a gold medal at the H&N Cup in 2020.[2] Also of note is the Junior World Cup 2016, where Tan, along with Tessa Neo and Martina Veloso, clinched a bronze medal.[8] 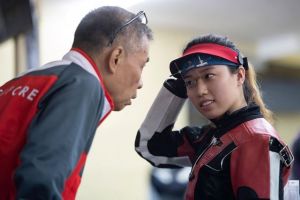 Tan pictured with her coach Song Haiping. Photo by The Straits Times.

On 3 May 2016, Tan competed in the women’s 10m air rifle event at the Junior World Cup in Suhl, Germany with Tessa Neo and Martina Veloso.[7] The trio won a bronze medal with a combined total score of 1,236.6.

In 2017, Tan competed in the women’s 10m air rifle at the Asian Championships in Wako City, Japan.[9] She won a bronze medal with a score of 228.1 points in this event.

In 2018, Tan competed in the women’s 10m air rifle event at the ISSF Junior World Cup with Ho Xiu Yi and Martina Veloso.[10] The trio clinched a silver medal in this event.

When interviewed by SG Sports TV on her performance, Adele shared that achievements in air rifling were not fixed:

“Shooting is a very special sport. So even if I qualify first or qualify eighth, it does not mean that in finals I’ll have the same results. I expected myself to do better, but I felt that with whatever we have, we fought our hardest. So that’s the most important thing.”[11]

On 26 January 2020, Tan competed in the H&N Cup in Munich, Germany, where she won the women’s 10m air rifle event with a score of 632.5 points.[2] She also set a new national record with her win, with her score exceeding her teammate Ho Xiu Yi’s previous national record of 630.8.

Below is a tabulation of Tan’s most recent records.

On 15 May 2021, the Singapore Shooting Association nominated Tan to represent it in the women’s 10m air rifle event at the Tokyo Olympics.[3] This decision was made after a selection process that took 1½ years due to the onset of COVID-19 in 2020.

Tan admitted that the selection process was difficult for her, especially since she had to balance her training and internal shoots with her undergraduate studies as a psychology major at NUS. She believed that her achievement represented her ability to perform under pressure:

“This achievement reinstates my ability to perform under pressure. However, it is only the beginning, because I will be up against the world's best of the best and I have to be prepared to face even tougher obstacles. That being said, my team and I will work hard, and smart to prepare for the games.”[3] 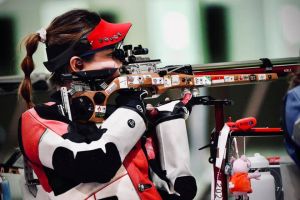 Tan competing at the Tokyo Olympics. Photo by Tan Chuan-Jin.

Tan said that the Tokyo Olympics was by far the hardest battle she’s had to fight:

“I have to be very honest and say that this is probably the toughest qualification that I’ve had to battle. Not just shoot, it is literally a battle.”[4]

Despite the difficulty she faced, Tan was still happy with her performance:

“I felt that today, actually, looking back, I'm quite satisfied with how I carried myself. Although, of course, there [is] still room for improvement.”[4]

Speaker of Parliament Tan Chuan-Jin, who is also the Singapore National Olympic Council president, was impressed at Tan representing Singapore for shooting at the Tokyo Olympics:

“Adele shared with me that she has been shooting for 10-11 years now and she is all of 22! Our shooting has really come some ways and it’s exciting to see new talent competing to represent Singapore.”[13]