On 19 March 2019, a video recording of an alleged burst pipe in the Marina Coastal Expressway (MCE) surfaced on Facebook. 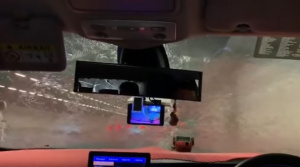 A screengrab from the Facebook video depicting the heavy pour in the MCE tunnel. Source.

On 19 March 2019, the Facebook page, The Singapore Taxi Driver, uploaded a 55-second long video with the following caption:

The video showed water pouring from the ceiling of the Marina Coastal Expressway (MCE). Motorcycles were parked by the road shoulder and motorists were seen stranded by the side of the tunnel.

The video was filmed from the back seat of a car. Notably, the driver and passenger could be heard discussing the cause of the water leak. The driver repeatedly said "pipe burst" [time stamps: 0:17 - 0:34 and 0:49 - 0:50] and confirmed that it was "seawater" when the passenger asked him [time stamp: 0:43 - 0:47]. The video gained traction with speculations about whether a pipe had burst or if seawater had breached the tunnel.[1]

On the same day, the Land Transport Authority (LTA) released a statement debunking the allegation. In their Facebook post, the LTA assured motorists that it was neither a burst pipe or seawater leakage. According to a spokesperson from LTA, the incident occurred due to a technical fault that triggered its water-based fire-fighting system.[2] The water sprinklers were triggered at 7.10 am, along a 25-metre stretch of the tunnel, heading west after the East Coast Parkway/Fort Road entrance.[3][4]

The problem was eventually rectified and the system was switched off at 7.26 am. 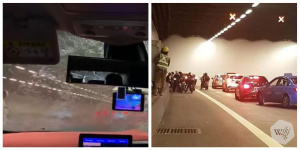 The 2019 heavy downpour in MCE (left) compared with the 2017 deluge system trip in the MCE (right). Source

Further evidence proving the structural integrity of the MCE debunks the alleged claims of a burst pipe or seawater seepage.

Netizens and drivers may have mistaken the sprinklers for a "burst pipe" due to the sheer volume of water falling from the ceiling.

The MCE tunnels are equipped with a deluge sprinkler system to contain any fire-based accidents before the arrival of SCDF's first respondents.[5] Deluge sprinkler systems are hardly found in normal buildings. They are installed in large high-risk areas such as power plants and chemical storage facilities. The deluge fire-fighting system can dispense a large volume of water faster than a normal sprinkler system.[6][7]

According to a 2012 factsheet by the LTA, the Singapore Civil Defence Force (SCDF) requires all tunnels to have "fixed water-based fire fighting systems like the deluge system".[8] 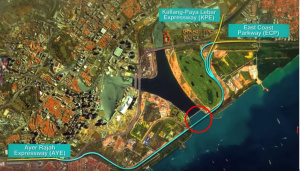 The undersea section of the MCE is circled in red. Screengrab from LTA's YouTube video.

A 420-metre section of the MCE was built beneath the seabed, south of the Marina Barrage. This was the first road in Singapore to be built under the sea. At its deepest, this stretch of road measured 25 metres below sea level.[9] Hence, it is understandable that road users are worried about seawater seepage.

Chuah Han Leong acknowledged that leaks might occur over time. However, groutable tubes along the MCE provide a solution should there be any leaks in the structure. These tubes allow a sealant to be pumped in to fill up any leaks.[11] 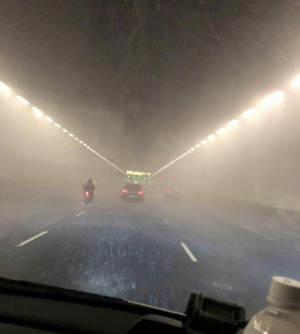 A photo from the 2018 MCE burst pipe incident. Source.

The reaction of netizens and motorists to this incident can be attributed to similar incidents that had occurred in the MCE. In 2018, a pipe had actually burst in the MCE. Similar to this 2019 incident, the water sprinklers in the MCE tunnels had been accidentally activated in 2015 and 2017.

On 16 January 2018, it was reported that a pipe had burst in the MCE tunnel at about 9.10 pm, causing a section of the expressway - specifically the east-bound tunnel between Central Boulevard Exit and the Marina Boulevard entrance - to be closed for about two hours. Traffic had to be diverted as affected motorists were made to re-enter the MCE tunnel via Marina Boulevard.[12][13]

The cause of the incident remained undisclosed.

On 16 May 2017, the fire-fighting system was accidentally activated in the afternoon. According to an LTA spokesperson, the system was immediately switched off after verifying that there was no fire. Normal traffic conditions resumed about 10 minutes later.[14]

On 14 April 2015, it was reported that a torrent of water poured from the ceiling of the tunnels. Following the report, LTA explained that a contractor had “accidentally triggered” its fire-sprinkler system. The contractor had been cleaning and doing maintenance work on tunnel wall cladding.[15] According to LTA, it was immediately switched off and normal traffic condition resumed thereafter.[16]