Steven Lim is a Singaporean celebrity best known for his audition on Singapore Idol in 2004. He currently owns a company that specializes in advertising and talent management. On top of this, he holds fitness classes and provides professional videography and photography services.[1] Over the years, he has accumulated many personal achievements including authorship of a book, songs, as well as appearing in some commercials. In 2013, Steven Lim uploaded a photograph of his tax statement on his website (official website), boasting an income of more than SGD$100,000, indicating the success he has attained financially.[2]

In addition to this, he is also known to have been part of controversial events including a dispute with Aaron Tan and participating in the 2017 Asia Fighting Championships (AFC).

Steven Lim grew up in Singapore and attended Yuhua Primary School from 1983 to 1988. He went on to receive his secondary education at Commonwealth Secondary School (1989) and Yio Chu Kang Secondary School (1990-1992) as an Express Stream student, before furthering his studies in Business Studies at ITE. He graduated Nanyang Polytechnic with a diploma in Marketing.

In an interview conducted by Rice Media with Steven Lim’s father, it was revealed that Steven had experienced his first shot at performing and fame when he participated in Star Search 2003.[3] Subsequently, he rose to fame when he auditioned for the first season of Singapore Idol in 2004, where he had stripteased to the song ‘She Bangs’ by Ricky Martin. At the age of 36, Steven was asked to leave his home by his parents as they wanted him to gain independence and hoped that this would have steered him away from his goals to become famous. 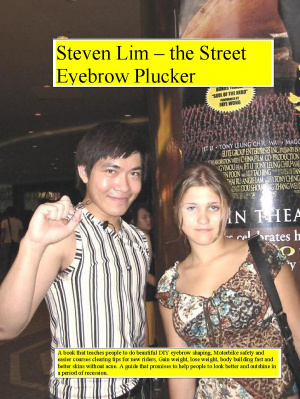 In 2003, Steven Lim had written and published his own autobiography called ‘Steven Lim, The Eyebrow Street Plucker’. In his book, he focuses on personal life lessons and experiences, with the purpose of the book to teach his readers to groom and better themselves. The life skills portrayed in the book include eyebrow shaping, motorbike riding, managing body weight and skin care.

The 20-page book is available for reference uses at PublicationSG, an external collection created under the National Library Board (NLB) that catalogues Singapore’s published heritage.[5]

StevenLim Dot Net Models is a managing agency that is a subsidiary of Eyebrowser Trading & Marketing. The models and talents under the agency are hired mainly for commercials, events and photo shoots. 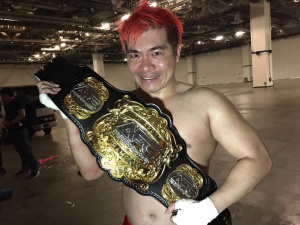 Steven Lim pictured on 27 September 2017 after his victory in the AFC. Photo from Yahoo Lifestyle Singapore.

Initially, the Muay Thai match was meant to be between Steven Lim and Former Singapore Idol runner-up Sylvester Sim. This match had originally resulted from a social media conflict between Steven Lim and Sylvester Sim in 2008 due to rumours that Steven had been bad-mouthing Sylvester. However, Sim had pulled out of the fight beforehand citing the lack of money for insurance coverage as a reason.[7] World Bodybuilding & Physique Sports Federation (WBPF) Singapore president, Pradip Subramanian, was brought in as a last minute replacement for Sylvester Sim.

The match between Steven Lim and Pradip Subramaniam was organised by AFC Holding Singapore and eventually held at Marina Bay Sands on 23 September 2017.[8] The match lasted for less than 5 minutes and ended with a technical knockout by Steven. Pradip Subramaniam was taken to Singapore General Hospital (SGH) immediately after the fight, where he eventually passed away due to cardiac arrest respiratory failure.[9]

In 2012, Steven Lim allegedly had a dispute with Aaron Tan, a Singaporean youth that was known for being a ‘gangster’ as he posted a video online accusing a younger individual of flirting with his then ex-girlfriend.[10] At the time of their conflict, Steven Lim was 36 years of age while Aaron Tan was 19 years old.[11] By February 2012, there were a total of 4 videos posted by both individuals.[12] These videos mainly contained insults and vulgarities directed at each other. However, as reported on LianHe WanBao, a relative of Aaron had claimed that the conflict had been staged by Steven himself, with Steven having paid Aaron to film the video insulting him.[13]