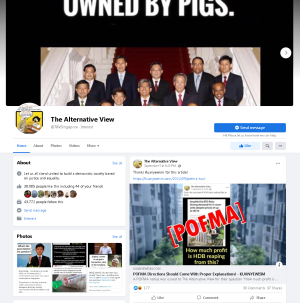 The Alternative View is a Facebook page that covers topics of interest in Singapore and local news. As of September 2022, the page has a total of 43,773 Facebook followers.

The Alternative View is a Facebook page that covers topics of interest in Singapore and local news. The page was created on 12 May 2012 and is known for its provocative posts and memes about politics, news and other happenings in Singapore.[1]

Based on Facebook’s Page transparency, it can be seen that 3 Singapore locations are logged for the people who manage the page, hence it is assumed that the page is run by a group of three Singaporeans.[2]

On its “About” page on Facebook, the page lists itself as a page of “Interest” and has a description that rallies Singaporeans to unite to build a “a democratic society based on justice and equality.”[1] 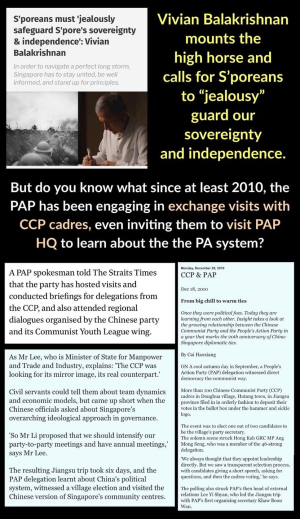 The page has previously covered things from internet censorship and haze to the elections in Singapore and the sector 377A’s repeal.[2]

On 4 September 2022, an article was published by CNA reporting that a Protection from Online Falsehoods and Manipulation Act (POFMA) correction direction was issued to The Alternative View over a Facebook post it made regarding HDB’s latest price announcement for Ang Mo Kio BTO flats.[3] 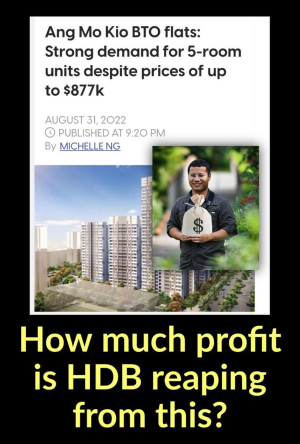 The Facebook post in question was posted on 1 September 2022 at 9.20PM with the caption of the image reading “How much profit is HDB reaping from this?”. An image of Desmond Lee, the Minister for National Development, holding a sack of money had also been superimposed along with a screenshot of an AsiaOne article.[3]

MND came out to say that the statement made was a false one, and that “HDB will not profit from the sale of the flats”.[3] The Alternative View was made to publish a correction notice to correct the facts. An update was made on the original post at 9.04pm on 4 September 2022 with the following updated caption:

“Don’t be surprised if HDB starts selling flats at $1m. POFMA Correction Notice - 4 Sept 2022: As directed by MND, this POFMA notice is being posted to provide information from MND that HDB will not profit from the development and sale of Central Weave @ AMK BTO flats.

“In fact, it (HDB) will incur a loss from this project, as the estimated amount to be collected from the sale is lower than the estimated total development cost of the project. If we take into account the CPF housing grants that HDB will extend to eligible buyers, the deficit is higher still.”

For MND’s press release, refer to this link: 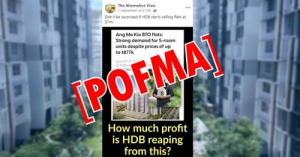 An image that accompanies the KUANYEWISM article. Photo from KUANYEWISM.

On 5 September 2022, an article titled “POFMA Directions Should Come With Proper Explanations!” was penned by an author named ChinHan for the website KUANYEWISM which addressed the POFMA direction issues to The Alternative View.[4]

The article claimed that while a POFMA correction was issued to The Alternative View MND had come forth with a statement, it was not properly explained and questioned the intention behind the POFMA.[4] The article goes on to say that POFMA notices should be followed by “a proper explanation for why the statement is false.”

The author also stated that “The only information given was sweeping statements about how HDB gets a deficit from giving out grants and making housing affordable. However, netters feel that more information should be given.”[4]

The Alternative View re-shared the article on their Facebook page on 5 September at 9.23pm with the caption “Thanks Kuanyewism for this article!”.[4]