A screenshot of Denise from her Channel 8 feature. Photo from Facebook.

Denise Teo JiaQi, better known by her online streaming channel name ‘supercatkei’, is a Singaporean full-time Twitch streamer and digital creator. She hosts her livestreams mainly on her Twitch channel, where she has over 53.2k followers.[1] She is also active on TikTok and Instagram, where she has 31.9k and 13.5k followers respectively.[2][3]

According to her LinkedIn profile, Denise studied for a Diploma in Film, Sound & Video at Ngee Ann Polytechnic (NP) from 2014 to 2018, before attaining a Master of Arts in Digital Management from Hyper Island in 2022.[4] During her time at NP, she was part of the campus’ Radio Heatwave station, and hosted a weekly show called InvAsian every Monday.[4]

Denise rejected opportunities to study for a degree at Laselle, NTU and NUS after graduating from NP to focus on developing startups in Singapore and New York.[5]

Before becoming a full-time livestreamer, Denise worked at several companies during and after her polytechnic studies.[4] This included:

Denise also listed herself as a Freelance Producer and Content Creator from 2015 to 2020, having worked with clients such as ASICS, NCF Martell, and Aliwal Arts Centre.[4] 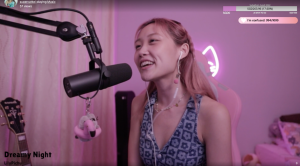 A screenshot from one of Denise’s livestreams. Photo from Twitch.

In mid-2020, Denise decided to return to Singapore from New York - where she was based - to “be close to her family”, in light of the COVID-19 pandemic.[6] In an interview, Denise shared that she got bored during the stay-home period, and so decided to start livestreaming in August 2020.[5] She said:

“I had a lot of fun streaming, and soon I found myself spending most of my free time creating new content and building my Twitch community.”[6]

On her Twitch channel, Denise streams across a variety of categories, such as her playing online games like Valorant and Apex Legends, recordings of her performing song covers, and vlogs on her daily life.[1]

“I like to discuss topics that are relevant to my followers but are not talked about enough. For example, I recently did an episode on whether you need a university degree to succeed in life. I also hosted two talks with therapists on mental health, which I think can be helpful for anyone right now.”[6]

Denise has also been approached for brand endorsements and partnerships, such as Asus, Riot Games and Poison PC.[6]

A screenshot of some of the merchandise that Denise sells online. Photo from supercatstore.

As part of her channel’s branding, Denise also operates an online store called supercatstore, where she sells merchandise such as socks, earrings, shirts and hoodies.[7]

In October 2021, a data leak by popular streaming platform Twitch revealed the highest earnings of several popular Twitch streamers between 2019 and 2021, which were paid to them by Twitch commensurate with their number of subscribers. It was revealed that Denise received over S$86,000 in two years.[8] In the list of Twitch’s top earners, she was ranked no. 3,457 worldwide.[9]