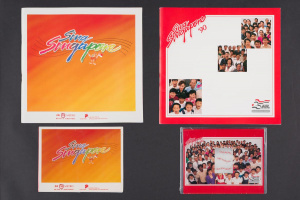 The songbooks and cassette tapes that had been sold in conjunction with Sing Singapore. Photo from Roots.sg.

Sing Singapore was an annual music festival aimed to familiarise Singaporeans with local songs, evoke a sense of community spirit, and nurture a sense of nationhood and patriotism.[1] It was officially launched in 1988 and was widely publicised for the next two years. However, the festival’s popularity waned in the subsequent decades before it tapered off from public memory. 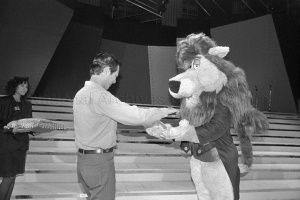 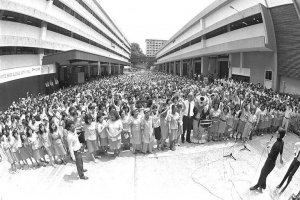 Jointly organised by the Ministry of Communications and Information and Fraser & Neave, the seven-month-long drive was filled with various public performances and singing competitions designed to promote community singing as a way of life.

On 30 January 1988, a one-and-a-half hours musical performance at the Padang marked the launch of Sing Singapore. Officiated by the Minister for Communications and Information and Second Minister for Defence (Policy) Dr Yeo Ning Hong, the event saw more than 3,600 performers, dancers and singers performing a medley of community songs such as We are Singapore, Muneru Valiba, Chan Mali Chan, Singapura Sunny Island and Five Stars Arising.[2] It also introduced Jazz-O, the Sing Singapore lion mascot who led the performances. The show was well-received by the public as thousands turned up to be a part of the festivities.[3]

In conjunction with the festival, the Ministry produced 10,000 copies of Sing Singapore songbooks and cassette tapes to be sold on the launch day. The book and tape contained 47 national and community songs in English, Mandarin, Malay and Tamil. Prices were set at S$3.60 for a 116-pages songbook and S$6.60 for a twin-cassette tape. It was also reported that more copies would be sold through the Metro department stores.[4] Additionally, the Ministry ran multiple advertisements that promoted various public performances and lists of “some familiar tunes” coupled with a brief synopsis of each song.[5][6]

Public reception to Sing Singapore was generally positive. For instance, Philips Singapore organised two separate singing sessions for its 5,000 workers. Led by their chairman and managing director, Mr Bonno H. Hylkema and conducted by Jazz-O, the singing sessions made Philips the first multinational corporation to take part in the Sing Singapore drive. In order to participate, Philips stopped production in its Toa Payoh and Jurong factories at separate timings for half an hour each in efforts to boost its employees’ morale.[7]

Furthermore, the Sing Singapore singing competition attracted a wide variety of participants to its multiple categories - Private Sector, Public Sector, Constituency and Schools. The Fantastic Force, the singing contingent from the Ministry of Home Affairs, won the overall challenge trophy in the Sing Singapore Finals and the first prize in the Public Sector category. 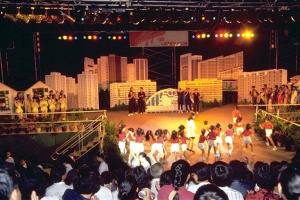 A view of the stage at Sing Singapore '90. Photo from National Archives Singapore.

On 29 December 1989, Sing Singapore ‘90 was launched at the National Stadium to commemorate Singapore's 25th anniversary celebrations. Unlike the previous year, Sing Singapore ‘90 forms the musical backdrop to the eight-month-long national day activities. The one-and-a-half hour programme consisted of a community singing, musical performances and unveiled the new celebration song One People, One Nation, One Singapore.[8]

The event was well-received, having drawn a crowd of around 20,000 people. Furthermore, a pack of two Sing Singapore ‘90 cassette tapes were sold at $6.70 each at Metro stores following the events of the night.[9] Similar to the inaugural 1988 Sing Singapore, various singing competitions for different categories were held, such as in schools and among the private sectors.[10][11]

However in subsequent years, not much had been reported with regards to Sing Singapore. In 1994 and 1998, Sing Singapore was promoted as a singing competition although it received less publicity than before.[12][13] 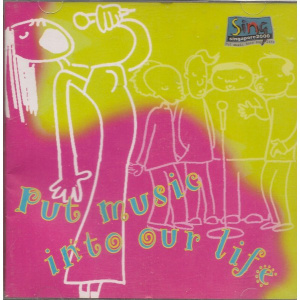 In 2000, Sing Singapore was relaunched as a biannual singing event organised by the National Arts Council. It aimed to discover and promote original songs written by and for Singaporeans in an effort to cultivate a greater sense of togetherness. For a period of five months, Sing Singapore hosted a range of activities such as public performances and singing competitions.[14]

The event was launched by Mr David T. E. Lim at the Music Street at Orchard MRT Park and was graced by local singers and musical groups such as Mavis Hee, Jai, Shirley Yee, Sheikh Haikel and Budak Pandai. A double CD album compilation of Singapore songs was also produced and available at major music stores.[15]

Like Sing Singapore 1988 and 1990, an album had been released in conjunction with the event. This iteration of Sing Singapore saw the release of a CD album which included 2 discs comprising of 30 songs in total. Some notable songs on the album include Home by Kit Chan, Five Stars Arising and Singapore Town.[16]

In subsequent years, Sing Singapore continued to be held in 2002 and 2003, with a main focus on public concerts.[17][18] It was then rebranded as a web platform to discover and download local community and national day songs.

As of July 2019, it has been confirmed that the main website was shut down and subsumed under the now-defunct app.www.sg.[19]