Sam Driscoll (born 1993) is a Singaporean singer-songwriter and online influencer who made his official debut with the single, “So Tired” in 2016.[1][2][3] Prior to launching a career as a musician and performer, he had regularly posted song covers and comedic videos on YouTube.[4]

In 2011, Sam Driscoll published a video titled, “So Singaporean” which went viral and is his best-performing video, with over 428,000 views as of 2022.[5] In October 2022, Sam was once again brought into the spotlight after joining the cast of Singapore reality dating show, One Week Love.[6] 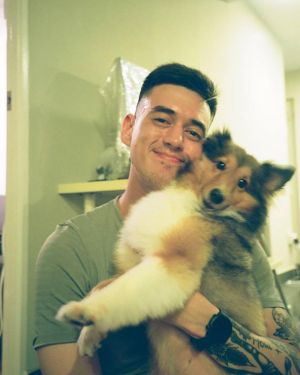 Sam Driscoll and his dog, Warwick. Photo from Instagram.

Sam Driscoll completed his formal education at the Lasalle College of The Arts, where he was enrolled from between 2016 to 2019.[3][15] He graduated with a Bachelor of Arts (Honours) in Music. Prior to that, he attended classes at Temasek Polytechnic from 2011 to 2014, where he received a Diploma in Business Process and Systems Engineering.[15] From 2006 to 2010, Sam completed his secondary education at Ngee Ann Secondary School.[15]

In 2014, Sam was selected as a finalist in the NAC Noise Singapore Music Mentorship Programme, and received much attention from the local music industry.[16]

On top of music covers and original compositions, Sam Driscoll is well-known among Singaporeans for his viral video, “So Singaporean”.[5] This was among several other comedic videos that Sam published between 2010 and 2013, including “Singapore is Awesome” and “Angmoh Speaking Chinese”. Both videos had also gone viral and managed to gain 180,000 and 292,000 views respectively.[17][18]

In late 2016, Sam went on a 4-year hiatus and made a comeback with a personal vlog in 2020, where he shared about his 2-year experience with therapy in Singapore.[19] In a subsequent vlog in 2022, he went on to share that he decided to go on a YouTube hiatus due to social anxiety and wanting to take time to learn how to cope with fame and public attention he gained in his adolescence.[20] Since then, he has returned to posting videos on the platform, including reactions to his appearance on the Singapore dating show, One Week Love.[21]

“I have anxiety when I talk to people. It was something I wasn’t comfortable with last time. I didn’t know how to quite deal with that aspect of the fame and the popularity…There were also a lot of comments on how fake I was because I don’t look like how I sound like. So, there were a lot of comments saying, ‘Oh, you know he’s not even Singaporean. Why’s a foreigner doing this kind of thing?’”[20]

In 2013, Sam Driscoll took up a brief stint at FourSkin Singapore, where he was involved in product advertisement and the development of the FourSkin online store.[15]

Whilst completing his National Service, Sam Driscoll was an Artiste under the Singapore Armed Forces’ Music & Drama Company.[15] Over the next 2 years, he would go on to become the Assistant Radio Host to Power 98 radio station’s DJ Mike Tan, write the winning song for the Power 98 Singing Competition (2016), and perform for the President at the Istana on 3 separate occasions.[15]

He also took up the role of Lead Singer of the pop trio, The Jamalot, which performed over a hundred shows across Singapore.[15] 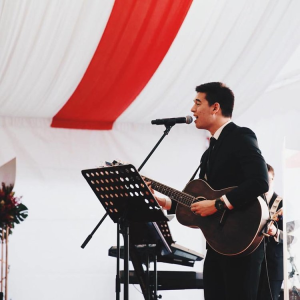 Sam Driscoll performing at an event. Photo from samdriscoll.com.

Sam Driscoll first debuted with his first single, “So Tired” in 2016 and subsequently released his first album, “Call It a Day” in 2019. During this time, he has also been performing regularly at prominent venues like Esplanade and Hard Rock Cafe.

Sam Driscoll shared that his passion for music began at an early age as he had been influenced by his uncle.[15] He then proceeded to learn how to play the guitar at 12 years old, before moving on to singing and song-writing.[15]

In 2010, Sam Driscoll began posting covers of English songs and original compositions on YouTube, where he gained a considerable amount of attention and appreciation for his content.[4] On average, these videos would receive between 10,000 to 100,000 views. As of 2022, his 2011 cover of The Script’s “The Man Who Can’t Be Moved” boasts a whopping 104,000 views.[22] 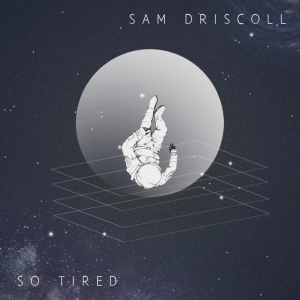 The cover of Sam Driscoll’s debut single, So Tired. Photo from Spotify.

In 2016, Sam Driscoll released his debut single, "So Tired" on Spotify and iTunes. Subsequently, he also released his first album, “Call It A Day” in 2019.[2]

Since 2019, Sam Driscoll has performed at various musical performances and events.[15] His regular gigs include performing at:[7][10]

Thus far, he has also performed at larger venues like the Esplanade, *SCAPE, Hard Rock Cafe, and Orchard Central.[15] 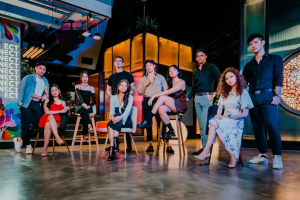 Sam is pictured fourth from the left, alongside the rest of One Week Love’s cast. Photo from TSL Media Group.

Sam Driscoll participated in the Singapore reality dating show, One Week Love, which premiered on 18 October 2022.[6] The show follows Sam and nine other young and single contestants who try to find love while living under one roof for a week. This show is a local take on well-known international dating shows like Love Island and Single’s Inferno.[6]

“I think my mindset is, along the lines of: I’m just going in to see if anything happens. So I really wanna go in there and just open up, I guess.”[11]

In 2015, Sam took part in the second season of local singing competition, The Final 1.[15] He passed the auditions with Taylor Swift’s hit song, “Blank Space” and managed to make it to top 16 finalists before being eliminated.