The development of motorcycle groups and enthusiasts in Singapore was marked by two separate waves. Between the late 1970s and 1980s, groups of thrill-seeking youths, dubbed as ‘hell-riders’ by the media, held illegal motorcycle street racing on public roads. In response, the Singapore authorities implemented various measures to curb these activities. The 2010s saw the rise of motorcycle groups that conduct recreational road trips and charity rides. 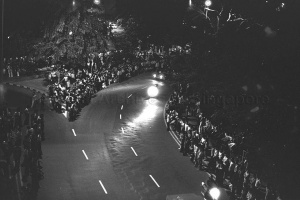 A 1977 photograph of spectators gathered at a section of the 'Monza' Circuit on Orchard Road and Penang Road. Photo from National Archives Singapore. 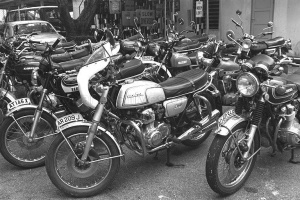 Motorbikes that had been confiscated in a 1977 hell-riding raid. Photo from National Archives Singapore.

Hell-riders consisted of youths of all races, aged between 16 and 22, who were likely to ride modified motorcycles in the 125cc to 350cc. Some of the common modifications done to their motorcycles include, but are not limited to, altered exhaust pipes for better and louder acceleration and extended throttle cables to improve revving.[1]

Hell-riding gangs were often identified by the colour and marking on their crash helmets, symbols and logos. Described as a motorcycle fraternity, a gang could number from between 20 to 170 members, with a leader helming each gang most of the time. Riding a motorcycle with registration number 1, a leader’s job was to champion for his members and recruit more people.[2] Additionally, these gangs were racially segregated and inter-gang rivalry was rife.

Held in circuits, jackpot races were organised races involving both gangs and motorcycle shops. These races ran in the early morning and were often difficult to detect. Such races were filled with mechanics, tow trucks, logistic support and a large crowd of spectators.[3] Particularly, gambling syndicates were present in these circuits to conduct illegal betting on races. Some hell-riders were even hired and sponsored by these syndicates as ‘jockeys’, making the races more attractive.[4]

Gangs would often gather at various food centres, such as Jalan Bukit Merah, Orchard Mall and Telok Ayer Hawker Centre in the early evenings on Saturday, Sunday, Public Holidays and the eve of Public Holidays.[5] They would head down to theatres with midnight shows, such as Prince Theatre at Beach Road and Bedok Theatre at Changi, before moving to various racing circuits after the shows.[6] The locations of these circuits were as such:

While spontaneous races did occur at traffic junctions, organised races against different gangs and illegal betting were held in these circuits.[7] It has also been reported that some women riders participated in these races. These women were the subject of bets among on-lookers because of the novelty of their presence. Male riders often acted as look-outs during such races because they were banned from challenging the women.[8]

The rapidly increasing death rates among motorcyclists was a worrying trend that emerged with hell-riding. In 1982, there were 126 deaths, 509 serious injuries and more than 5,000 minor injuries from motorcycle mishaps. These deaths were attributed to the hell-riders’ dangerous and reckless driving, their lack of experience and road conditions.[10] 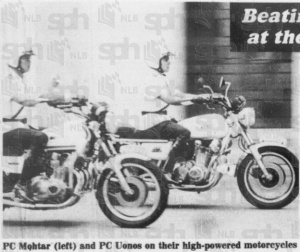 PCs Mohtar (left) and Uonos (right) were featured in a 1981 newspaper report for their skills and excellence. Photo from NewspaperSG.

Amidst the growing number of hell-riders and hell-riding activity, members of the public called out to the relevant authorities for stronger and tougher police action.[11][12][13][14] In response, the Traffic Police upgraded their enforcement squad to be better equipped at chasing the hell-riders.

The Special Enforcement Squad (SES), otherwise known as the Mobile Squad, was a new elite police unit that had been formed in response to the growing number of hell-riding cases.[15] They were tasked to rid the streets of hell-riders, performing escort duties to VIPs and patrolling in plainclothes. The squad was trained by five-time Japanese Motocross champion, Mr Kazutoshi Iwao. The two-week course taught them better riding techniques in rough conditions and upgrading the professional skill of the Traffic Police.

PCs Mohtar bin Haji Abdul Rahman and Uonos Mohd of the SES were two exemplary Traffic Policemen. They were commended by the Commissioner of Police, Mr Goh Yong Hong for their courage, dedication, and consistently high standard of performance.[16][17] They were even able to strike fear in the hell-riders, becoming legends in the motorbiking world.[18]

The Road Traffic Act was passed in parliament to curb hell-riding activities during the 1970s. Under the Act, motorists were charged with dangerous or reckless driving. A first offence carried a maximum penalty of S$1,000 or 6 months imprisonment or both, with a possible disqualification of their driving licence. A second offence or more carried a double penalty with a mandatory disqualification of licence.[19] Amidst calls from the members of the public to toughen existing penalties, an amended bill was then passed in 1984. 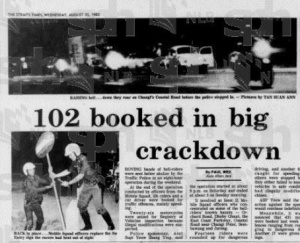 The headline from a 1982 newspaper report on a circuit race crackdown. Photo from NewspaperSG.

The Road Traffic (Amendment No. 2) Act charged anyone who promoted or took part in any unauthorised “competition or a trial of speed” with a mandatory jail sentence of up to 6 months for a first offence and 12 months for subsequent offences. Fines were also increased from S$1,000 to S$2,000 for first-time offenders and S$2,000 to S$3,000 for others. Offenders also faced mandatory disqualification from driving and possible forfeiture of their vehicles.[20]

Following that, Operation Road Runner II was conducted on 21 October 1984. It was the first major operation after the implementation of the amended bill. The big crackdown at Changi Point resulted in the seizure of 224 motorcycles. Riders were also made to attend a special “crash-lesson” that included a 45-minute lecture and slide show on the virtues of safe riding on public highways.[21]

In addition to the Road Traffic Act, the state began to ban learner riders from the roads from October 1985. Learner riders were also required to undergo a more comprehensive test at the Ang Mo Kio driving and riding circuit to ensure that they were able to handle their machines skillfully.[22] Motorists were also required to regularly send their motorcycles to the Registry of Vehicles for inspections and offenders would be booked for minor modifications.[23]

While public opinion was generally supportive of the strict police action, a few of them criticised the Traffic Police for conducting indiscriminate checks on “gentleman” riders. A few concerned members of society wrote to newspapers, calling for authorities concerned to exercise more discretion in their judgement.[25][26]

The Singapore Motorcycle Trade Association (SMTA) also expressed concerns regarding the proposed action of vehicle forfeiture. The SMTA felt that the proposal was unfair to the motorcycle dealers because they would face difficulties in repossessing the impounded motorcycles and in collecting the monthly instalments from motorists who had their vehicles confiscated.[27] Additionally, some motorcycle dealers suffered a sharp drop in sales since 1983 as the stiffer licence test deterred would-be buyers and learners.[28] 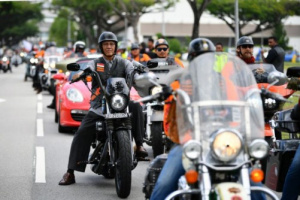 Hell-riding activities were largely contained by the end of the 1980s. Meanwhile, the 2010s ushered in a new era of motorcycle groups and enthusiasts. Dubbed as ‘recreational groups’, these motorcyclists often organised road trips and participated in various charity rides held in conjunction with major celebrations. Unlike the hell-riding gangs, these groups promote bonding among motorcyclists and reach out to give back to the community. For instance, the Harley Owners Group (Singapore Chapter) has organised road trips to Malaysia and charity rides for its group of Harley Davidson riders.[29]

Riders Aid Singapore functions as a social enterprise that has worked closely with different groups to organise charity rides. Founded in 2006, the group has organised various events such as the 2018 Fundraising for the Victims of Palu and Donggala, Earthquake and Tsunami Disaster Relief and the 2019 National Day Charity Ride in support of the Children’s Cancer Foundation. The organisation has been well-received and supported by different members of the public and government bodies.[30]

In 2012, 800 riders from Riders Aid rode for the Chinese New Year charity ride in support for the Singapore Power Heartware Fund. A sum of S$10,000 was raised by the riders and Singapore Power matched the donations raised dollar by dollar.[31]

In 2018, around 400 riders participated in Chong Aik International Wheels of Love (WOL) 2018. Instead of riding, these riders spring cleaned and painted 25 households across three blocks of flats in Eunos Crescent. Chong Aik International, a company that specialised in motorcycle spare parts, accessories and protection gears, spent S$15,000 on necessary equipment, paints and brushes needed to upkeep these households.[32]

In 2019, motorcyclists from more than 150 groups in Singapore and Malaysia participated in the record-breaking charity convoy to raise funds for Jamiyah Singapore’s food bank. The Hari Raya Charity Ride was organised by Bikers Union SG and Singapore Bikerz Inc and drew support from more than 700 bikers from Singapore, Malaysia and Brunei. Gracing this event was President Halimah Yacob while her husband, Mr Mohamed Abdullah Alhabshee, participated and was part of the motorcycle convoy.[33]