Moe Kasim is a Singaporean costume designer who is most famously known for his work in Miss Universe Singapore (MUS) 2018 that was based off the Trump-Kim Summit. On top of this, Moe Kasim founded the costume design and rental company ‘Moephosis’ and has designed costumes for many local plays and pageants. Moe Kasim first started his journey in performing arts during his time at the Singapore Armed Forces (SAF) Music & Drama Company. He first explored singing, acting and dancing from the age of 9 but pursued a career in costume designing instead. He is a self-taught designer who started off by designing costumes for roadshows.[1] 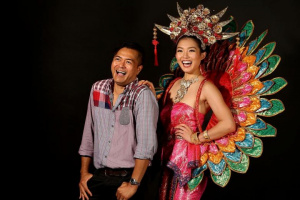 Moephosis (official website) is a costume designing and rental company. In its early days, the company produced costumes for local theatre productions and provided talents for performing and event planning. In 2008, the company opened its first boutique at 15 Shaw Road (nearest MRT Tai Seng) where they now offer costume rental including themed outfits such as superheroes and period costumes for the Victorian era. The company also offers customization and tailoring services for their costumes.[2]

Moe Kasim has designed several notable gowns for Miss Universe Singapore. In 2016, he designed a peranakan-style pink gown for MUS 2016 Miss Cheryl Chou. The next year, he designed a two piece costume based on Singapore’s Gardens by the Bay for MUS 2017 Miss Manuela Bruntraeger.[3] The costume featured LED lights and incorporated the motif of Singapore's national flower, the orchid. In 2018, he designed a gown inspired by the Trump-Kim Summit in Singapore for MUS 2018 Miss Zahra Khanum. He had also designed several dresses for Miss International contestants including an embroidered dress for Ms Kylie Yeo during the 2017 edition of the pageant and a gold gown for Ms Eileen Feng in 2018. 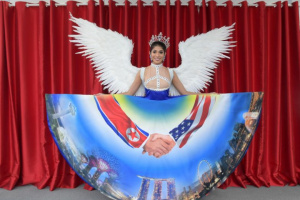 Apart from pageant costumes, Moe Kasim has also designed costumes for many theatre productions including local theatre company W!LD RICE’s musical comedy ‘Aladdin’ in 2004 and ‘Oi! Sleeping Beauty!’ in 2005. Furthermore, he had designed for Singapore Repertory Theatre’s ‘Romeo & Juliet’ in 2016. He also made costumes for local films including ‘881’ in 2007 and ‘12 Lotus’ in 2008.

For MUS 2018, Moe Kasim had designed a blue gown based on the Tump-Kim Summit that was organised in Singapore earlier that year. The design brief was assigned to Moe Kasim by the pageant organisers. When the gown was revealed, it sparked negative reactions amongst Singaporeans online as many started criticising the dress for not being representative of the country.[4] Moe Kasim responded that this negative reaction would not faze him or his work ethic. He explained that the dress had been designed to be more straightforward in portraying the theme to avoid the misinterpretation that may have occurred if a more subtle design was presented.[5]