Lee Theng Kiat (born 1953) is the current Chairman of Temasek International and SingTel Telecommunications Limited.[1] A veteran in the business and investment sectors, Lee has held board positions in various companies in Singapore.

Lee Theng Kiat was a student at National Junior College.[2][3] He is also an alumnus of the National University of Singapore (NUS),[4] where he graduated with a Bachelor of Laws with Honours from the Faculty of Law in 1976.[5][6][7]

A lawyer by training, Lee Theng Kiat started his career at the Singapore Legal Service. Over the years, he has been appointed to numerous senior management positions in several well-known companies. As of July 2020, he is the Chairman of SingTel Telecommunications Limited as well as the Executive Director and Chairman of Temasek Holdings.

After university, Lee Theng Kiat served in the Singapore Legal Service for over eight years before transitioning into the communications and business sectors.[7][8] The Singapore Legal Service is an association of lawyers who serve in various government institutions such as the statutory boards and ministries.[9] A 1984 news report states that he was the Assistant Registrar of Companies at the time.[10] He reportedly left the Legal Service in 1985 to join a private firm.[11] Prior to Lee Theng Kiat's leadership appointments in ST Telemedia in 1994, Lee held various senior positions in other companies under the Singapore Technologies Group where he oversaw legal and business development plans.[8] 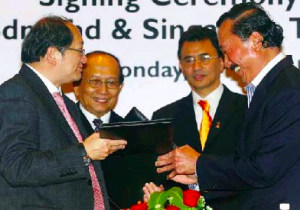 Lee Theng Kiat in 2010 with U Mobile's Chairman at the time, Tan Sri Vincent Tan. Photo from source.

From 1994 to 2012, Lee Theng Kiat served as the founding President and Chief Executive Officer for Singapore Technologies Telemedia (ST Telemedia), a communications and media investment company.[1] During his tenure at ST Telemedia, Lee expanded the company’s influence in the Asia Pacific region,[12] Europe and America.[7] In 2010, ST Telemedia invested in U Mobile, reportedly Malaysia's fourth-largest mobile phone operator at the time.[13] A year later, Level 3 Communications, a broadband service provider based in the United States, bought Global Crossing, in which ST Telemedia held a 60 per cent stake.[14] ST Telemedia is also the main shareholder of StarHub.[15][16] 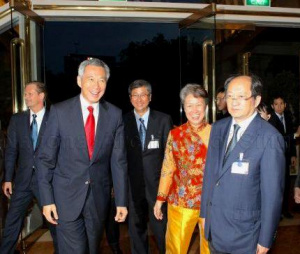 From October 2015 to March 2019, Lee Theng Kiat was the Chief Executive Officer of Temasek International, the management and investment division of Temasek Holdings.[1] As the CEO, he oversaw the company’s investments and its role as a shareholder and investor in its subsidiaries. In April 2019, Lee took over as the Chairman of the company.[21]

In December 2019, Lee Theng Kiat was announced as the designated Chairman for SingTel and would fully assume the post starting July 2020.[22] Besides this post, he is also a Director and the Chairman of SingTel’s finance and investment committee.

Due to Temasek Holdings being the largest controlling shareholder of SingTel and his board positions in both companies, Lee Theng Kiat was named as a Non-executive and Non-independent Director of SingTel.[23] This meant that he would remain a part of SingTel (non-independent) but would not be involved in the company’s daily operations (non-executive), taking on an advisory role instead.[24][25] As part of its corporate governance practice, a statement released by Temasek Holdings disclosed that Lee Theng Kiat would be recused from any information by Temasek Holdings regarding SingTel or any other Temasek-affiliated companies.[23] The practice of recusal would allow Lee to perform his duties in both Temasek Holdings and SingTel without any conflict of interest.

The following is a list of board appointments that Lee Theng Kiat has held over the years.