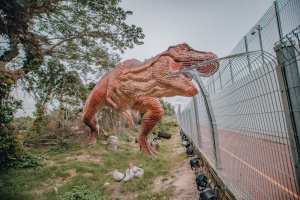 The Tyrannosaurus Rex is one of the prehistoric species featured along the path.

Changi Jurassic Mile is a cycling and jogging path in Singapore that features over 20 large-scaled models of prehistoric creatures across several different species.[1] It is a part of the 3.5-kilometre path that connects Changi Airport to East Coast Park.[2]

According to a report by The Straits Times, the Changi Jurassic Mile took about three years to complete.[3] The project was supported by the government statutory boards, National Parks (NParks) and Singapore Tourism Board (STB).[4] 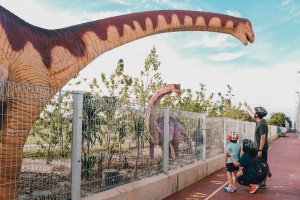 The Changi Jurassic Mile aims to be a family-friendly experience for both locals and tourists.

"The new experiential elements injected along the Changi Jurassic Mile will offer all who visit a sense of adventure and surprise. With the Changi Airport connector, we hope to give visitors a different experience of the airport."[6]

The park connector is also intended as an alternative route for Changi Airport staff who live in the eastern part of Singapore.[4] Although certain stretches of the park connector were reportedly completed by July 2020,[7][8] the connector was not entirely ready for public use until a few months later.[2] 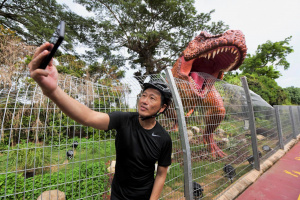 Changi Jurassic Mile was officially opened to the public on 11 October 2020.[2] Singapore’s transport minister, Ong Ye Kung officiated the launch and documented his experience on his social media platforms.[9] He stated the following in a Facebook post:

“Our cycling journey to the Jurassic Mile started from Bedok this morning. We meandered through cycling paths in the housing estates, down East Coast Parkway, before reaching Changi Airport... This is a labour of love by the Changi Airport team. The Airport is down, but the spirit roars!”[10]

The opening of Changi Jurassic Mile was covered by mainstream news sites[5][11] as well as alternative media channels such as MustShare News and Mothership.[12]

Though some netizens commend the innovation, others have also raised the concern that the path along the fenced dinosaur exhibits is too narrow for both cyclists and pedestrians to share.[11] 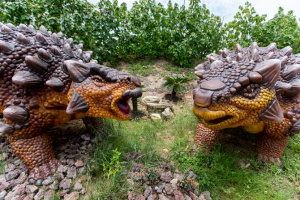 The Ankylosaurus models along the Changi Jurassic Mile.

The prehistoric creatures are permanent outdoor exhibits located at along a 1-kilometre stretch of the park connector.[3] The tallest among the models is approximately five metres in height[13] while the longest exhibit spans 17 metres.[5] The following are the types of creatures on exhibit.

The Changi Jurassic Mile also features education panels that present information about each type of dinosaur on exhibit.[7]

HUB&SPOKE is a pit-stop facility that offers a range of services from bicycle rental at the GoCycling outlet[14] to a dining option at the HUB&SPOKE café.[15][16] According to a report by The New Paper, the HUB&SPOKE café also employs Changi Airport staff.[6]