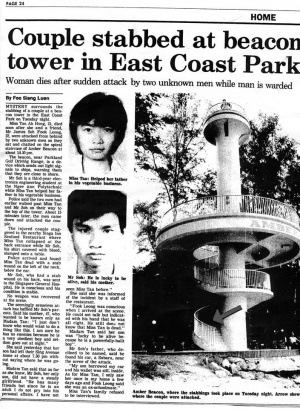 The Amber Beacon Tower is located at East Coast Park in Singapore. On 15 May 1990, a young couple was stabbed by two unknown assailants at the tower. While the male victim survived the ordeal, his partner Kelly Tan Ah Hong died from her injuries.[1]

The victims were 22-year-old James Soh Fook Leong and 21-year-old Kelly Tan Ah Hong. The pair had been friends since secondary school but only started dating two days before the attack. At the time, James Soh was a third-year electronics engineering student at Ngee Ann Polytechnic.[1] The deceased, Kelly Tan Ah Hong was one of seven children and described by her elder sister as a “vivacious” character.[2] 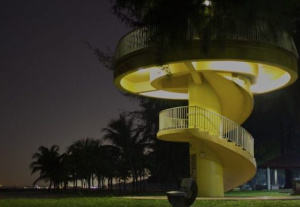 James Soh and Kelly Tan were sitting at Amber Beacon's spiral staircase and chatting when two men walked past them to get to the upper deck of the tower. The couple was reportedly attacked from behind about 15 minutes later at 10.30 PM.[1] Recounting the experience 15 years later, James shared:

"I defended myself instinctively. I stood up when I was stabbed and grabbed the guy. I got him over the rail and clinging on to the bar, but then he jumped down... he managed to run away."[3]

James suffered from a knife wound in his back while Kelly was stabbed in the neck while trying to escape from her attacker. The latter was pronounced dead when the police arrived at Singa Inn Seafood Restaurant (now defunct) where the pair had sought help before collapsing.[1][4]

On 17 May 1990, it was reported that the Criminal Investigation Department (CID)'s Special Investigation Section had taken over the case.[5] While there were speculations that the attackers could have been drug addicts, the motive of the attack was most likely, robbery.[6]

Due to its seclusion and privacy, East Coast Park was reportedly a popular date spot for courting couples at the time.[7] The assailants were thought to be robbers who saw James and Kelly as easy targets. According to a report by The New Paper, the attackers were also believed to be foreigners as they had spoken a foreign language while fleeing the scene and were also "dark-complexioned".[5] The male assailant who attacked James Soh was described to have short hair and about 173 cm tall. The second male assailant was about 167 cm and had curly black hair.[2]

According to police sources, the attack had taken place amidst a rise in robbery cases around the East Coast area.[5][6] In December 1989, The Straits Times reported three robbery cases in the East Coast area involving two men described to be in their twenties who had also been armed with knives.[8] In January 1990, there were separate reports of men in their twenties who abducted and robbed their victims from carparks in Beach Road, Marine Parade and East Coast Parkway.[9][10] 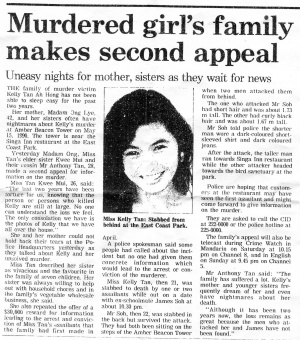 About two years after the murder, Kelly Tan Ah Hong’s family offered a S$30,000 reward for information leading to the capture of the assailants. The police had reportedly received a few calls about the incident but they were of little help to the case.[2] The family’s appeal was televised on the crime investigation show, Crime Watch in both English and Mandarin. The family members also re-enacted certain scenes leading up to the murder and lent their home at Serene Walk to the producers of the show.[11] In an interview with The Straits Times that was published 15 years after the incident, James Soh, the surviving victim shared:

“Until now it's still a big question mark for me: Why did it happen? A life was taken; what they did was ridiculous, and I wish they could be found."[3]

According to several urban legends, the Amber Beacon Tower is haunted by a spirit, likely to be Kelly Tan Ah Hong. Some passersby reported hearing screams of help while others have seen apparitions on the upper deck of the tower.[12]

In 2013, the YouTube user, R3LOAD Network uploaded a video titled “Female Ghost caught at East Coast Park Yellow Tower” that referenced the 1990 murder.[13] As of October 2020, the video has over 100,000 views. In 2019, the Taiwanese celebrity host, Lee Teng described his paranormal encounter in secondary school while camping near the tower. He said:

"That night, we took a few pictures and went for a night swim. All was well until the next morning, when I discovered that the Buddha pendant I was wearing was gone...When my friend developed the pictures soon after, we realised that there was a shadowy figure hovering near another friend’s head."[14]

The case was also revisited by the investigative YouTuber, AmysCrypt who makes videos about paranormal sites around the world.[15] In 2019, Mediacorp Ria 89.7FM's radio presenter, DJ KC, documented his exploration of the tower in a 30-minute-long video which has over 160,000 views as of October 2020.[16]