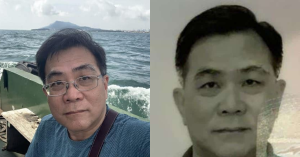 Since April 2021, he has been wanted by the United States of America’s Federal Bureau of Investigation (FBI) for multiple charges.[1] Said charges include alleged violations of international sanctions and money laundering.[1]

Kwek is the director and shareholder of Swanseas Port Services (S) Pte Ltd, a shipping agency and terminal operations company based in Singapore.[1]

According to the FBI, Kwek is alleged to have traded US$1.5 million (S$2 million) worth of petroleum oil shipments to North Korea, despite the international sanctions against the country.[2][3]

The United States’ Department of Justice (DOJ), which controls the FBI, also stated that Kwek had been charged with “conspiring to violate sanctions and to commit money laundering”.[1][2] A federal arrest warrant was then issued in the United States District Court in New York for him.[2][3] According to his FBI wanted notice,

According to investigations, Kwek had bought a 2,700-tonne oil tanker, named M/T Courageous, in July of 2019.[2] The Courageous’s Automatic Identification System was allegedly switched off between August and December of 2019.[2] Court documents also reveal that Kwek had bought more than 2.8 million kg of oil, which was later handed over to a North Korean vessel in the Korea Bay.[2] The cargo clearance permit also listed Swanseas Port Services as the carrier agent of the transfer.[2] The M/T Courageous was later seized in March of 2020.[2]

A screenshot of Kwek’s Wanted notice by the FBI. Photo from The Straits Times.

"As a result of his illegal activities, not only does Kwek face criminal charges, but his sanctions-evading ship, the Courageous, has been seized and will no longer enable North Korea's pattern of evading the global community's prohibitions on support for that regime.”[2]

The current Biden administration in the United States has offered a US$5 million (S$7 million) reward for anyone with information on his whereabouts.[4][5]

As of November 2022, Kwek remains in Singapore, where the Singapore Police Force (SPF) has placed him under investigation with the Commercial Affairs Department for offences under Singapore’s United Nations Act 2001.[4][5]