House of Seafood (螃蟹之家, also known as Pang Xie Zhi Jia) is a food and beverage (F&B) franchise that specialises in Chinese-style seafood dishes with a focus on crab.[1]

In 2019, House of Seafood gained notoriety for controversial publicity stunts. Amongst these stunts, the franchise’s use of live crabs in claw machines[2] and for park-walking[3] drew flak for being considered animal abuse.

In 2008, House of Seafood began as a small restaurant on 180 Yio Chu Kang Road.[1] According to the franchise’s website, the idea for the restaurant first came about after its founder, Francis Ng, took pity on elderly people collecting cardboard for a living. The restaurant was then established to provide waitering jobs for these people.[1]

The website went on to claim that House of Seafood was propelled to fame after a female reporter from Lianhe Zaobao visited the Yio Chu Kang restaurant. It was said that she had tried the restaurant’s signature black pepper crab and gave the dish a glowing review.[1] 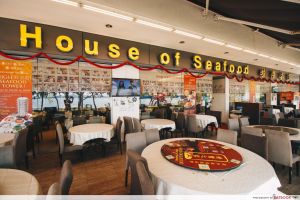 House of Seafood at The Punggol Settlement. Photo from EatBook.

Since its inception in 2008, House of Seafood has grown in popularity over the years, winning several awards for both the quality of its food and its innovation of ready-to-eat vacuum-packed crab dishes. 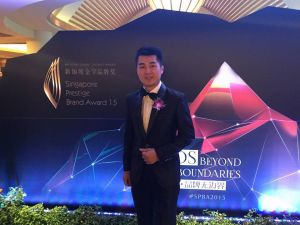 Below is a tabulation of House of Seafood’s awards:

As of 2021, House of Seafood has two outlets: One at The Punggol Settlement and the other at Clarke Quay.

House of Seafood’s original Yio Chu Kang outlet was ordered to close by the Urban Development Authority (URA) in 2012.[17] It was one of three restaurants blamed for causing traffic and parking obstructions on Yio Chu Kang Road.

Following the closure of its Yio Chu Kang outlet, House of Seafood went on to open new outlets at The Punggol Settlement, Joo Chiat, Tanjong Katong, and Upper Serangoon.[18]

In 2020, House of Seafood opened its newest outlet at Clarke Quay.[19]

Of all its outlets, House of Seafood’s Joo Chiat branch is the only outlet that has Halal certification.[20] To distinguish it from the other branches, this outlet is named “Home of Seafood”.

House of Seafood’s Upper Serangoon outlet closed in 2018.[21] As for its Tanjong Katong outlet, food websites like OpenRice indicate that it is permanently closed,[22] although the exact year is not stated.

Starting from 2017, House of Seafood entered the manufacturing industry to produce vacuum-packed ready-to-eat crab dishes that are purchasable from vending machines.[23] The franchise is listed with Singapore Food Manufacturers’ Association, where its manufacturing branch is indicated to be located at Kampong Ampat.[24]

In January 2021, House of Seafood opened an offshoot eatery called House of White Bee Hoon at The Punggol Settlement.[25] This new eatery specialises in seafood vermicelli.

House of Seafood has an overseas presence, with restaurants located in Malaysia[26] and Cambodia.[27] 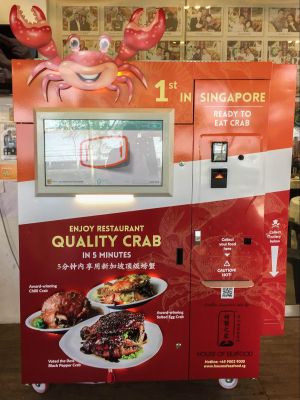 House of Seafood first made headlines in 2017 when it launched its first Ready-to-Eat Crab vending machine at its Punggol Settlement outlet.[23] Coming in three flavours - chilli, black pepper and salted egg yolk, the Ready-to-Eat crabs were dispensed hot in vacuum-sealed boxes.

“With a lack of staff and their unwillingness to work long hours, I need to transform my business to make it recession-proof with new technology. I cannot survive by just operating restaurants.”[23]

“The F&B industry is extremely competitive. If you do not innovate and challenge yourself to come up with new ideas, you will fall behind. Younger consumers don’t just want flavour. They want something out of the ordinary that they can take photographs of and post on social media.”[28] 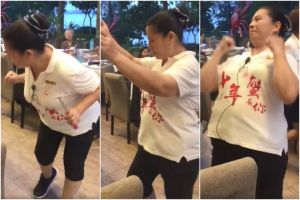 On 23 August 2018, Facebook user Anthony Boey shared a video showing a waitress at House of Seafood’s Punggol Settlement branch performing a chicken dance for a table of customers.[29] The video went viral on Facebook, chalking up to a million views.[30]

The Straits Times identified the waitress as Madam Loh Feng Ling. According to the article, the dance had sparked discussions that Madam Loh was forced to do the dance for work. She deflected these comments in the article, stating that she did it of her own free will:

“I am just an auntie who loves to dance and gao xiao (joke). I did it out of my own sincere desire. No matter what kind of music is played, I will naturally follow and dance.”[30] 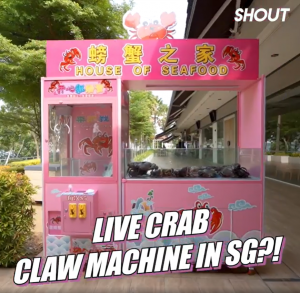 The live crab claw machine drew flak from netizens, who accused House of Seafood of animal cruelty.[2] Netizen Dawn Teo, for one, said the following:

“This is so cruel. They are living things and not toys.”[2]

On 23 October 2019, the publicity stunt drew the attention of the Society for the Prevention of Cruelty to Animals (SPCA), who emphasised that House of Seafood’s actions were cruel.[32] SPCA executive director Jaipal Singh Gill expressed the following opinion to The Straits Times:

“We are disturbed by the concept and the harm it causes animals for the sake of human entertainment. We feel this machine needs to be shut down immediately.”[30]

Dr. Gill also added that the SPCA had reported the case to National Parks Board's Animal and Veterinary Service (AVS).

On 24 October 2019, Francis Ng issued an apology statement on Facebook, where he said that House of Seafood was temporarily stopping the use of the machine.[33] He went on to explain the process and rationale behind the claw machine:

“We did not intend to use animals as play things. We noticed a lot of children at The Punggol Settlement and we wanted to educate them about marine life. We would like to stress that our team took one month of planning to come up with the design of the machine, so that it would not harm or hurt the crabs.”[31]

Dr. Gill did not feel that Francis Ng’s proposed measure was sufficient:

“We appreciate this clarification and are very happy with this news. However, what we are asking for is a full and permanent stop to the use of this machine.”[34] 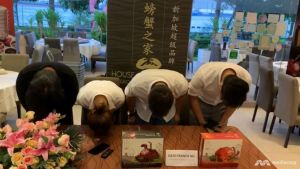 CEO Francis Ng and three of his staff bowing in apology. Photo from Channel News Asia.

On 25 October 2019, House of Seafood held a press conference at its Punggol Settlement outlet.[35] Here, Francis Ng reiterated his apology and announced that he would completely cease the use of the claw machine at all House of Seafood outlets:

“We fully support the direction of SPCA (Society for the Prevention of Cruelty to Animals) and are definitely against animal cruelty. Despite the measures to minimise discomfort to the crab, we note the feedback from the public and will cease the catching of the live animals in the machine completely in all House of Seafood outlets worldwide.”[35]

During the press conference, Francis Ng and three of his staff bowed in apology for about 30 seconds.

Consequently, the live crabs were replaced by empty boxes. Patrons could still try to catch these boxes for $5 a try and exchange any catches for cooked crab dishes. 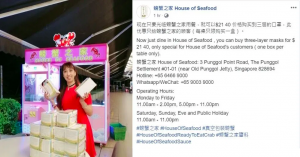 On 9 February 2020, House of Seafood published a Facebook post offering surgical masks exclusively to diners for $21.40 a box.[36] This came at a time when fears of COVID-19 were brewing in Singapore, causing a shortage in surgical masks.

Netizens criticised House of Seafood for allegedly trying to profit from the sale of surgical masks. In an interview with AsiaOne Francis Ng responded to the criticism by claiming that the entire situation was a misunderstanding and that he had no intention to sell the masks from the start:

“My main intention is to give them to my staff and to give to my loyalty customers. (sic).”[36]

House of Seafood then reissued a Facebook post where it announced a free distribution of masks for its members.[37] Members could collect a pack of three masks each. Netizens were not convinced of House of Seafood’s sincerity, with many accusing the franchise for causing a controversy for publicity.[35] 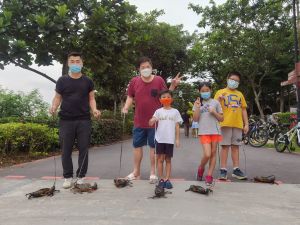 House of Seafood performing a crab walk. Photo from Must Share News.

On 18 June 2021, House of Seafood shared a series of photos on Facebook that showed Francis Ng, an unnamed man, and three children walking crabs at Punggol Waterway Park.[38][39] In the now-deleted Facebook post, the franchise said that they loved the crabs the same way everyone loved their pets.

“To make sure our crabs are really meaty that can satisfy every of our food patrons, we would bring them out strolling along the breezy Punggol Beach, just to get enough exercises...cheers!”[38]

Although the post went viral on social media, most of the reception was negative. A netizen heatedly criticised the franchise’s marketing decision:

“If bringing your crabs for walks is your marketing tactics, please go employ some experts to do the right marketing proposal for you (sic). THIS FAILS! People don’t bring their pets out for walks and cook them when they go home okay! Please don’t teach the kids in the photo the wrong mindset.”[38]

On 21 June 2021, ACRES and SPCA paid a visit to House of Seafood’s Punggol Settlement branch after receiving reports of the franchise’s actions.[40] ACRES then published a Facebook post, relating Francis Ng’s claim that "the crabs were not really walked but were used to pose for photos for a short while" and showed "how the crabs were housed in his F&B establishment.”

It then proceeded to touch on House of Seafood’s previous live crab claw machine stunt:

“Despite SPCA providing them with detailed guidelines on the welfare of these crabs during the previous saga, and the fact that the House of Seafood has already hosted a similar publicity stunt in the past through a crab claw machine, these cases highlight the need for standard of conduct for individuals and businesses that trade in live food animals in Singapore.”[40]

In an interview with AsiaOne, Francis Ng stressed that he did not intend to torment the crabs:

“Most importantly, I did not intend to cause unhappiness to animal lovers and activists because of my actions. I greatly apologise if I have caused hurt to them.”[41] 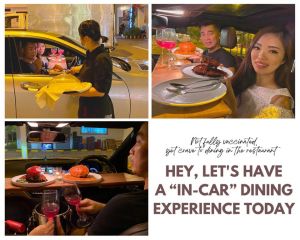 On 10 August 2021, House of Seafood announced a new in-car dining service for people who are not fully vaccinated.[42] According to the post, patrons could park at The Punggol Settlement’s car park and the restaurant would be able to deliver their orders to their vehicles.