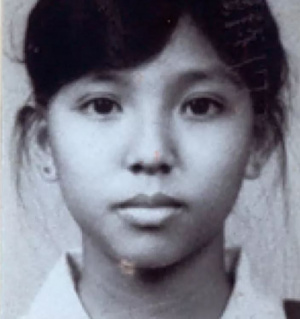 Winnifred Teo Suan Lie was an 18-year old student from Catholic Junior College (CJC) who was found murdered on May 23, 1985.[1] Her case resurfaced in the media due to the breakthrough of Lim Shiow Rong’s cold case, which has been unsolved since 1995.[2] As of January 2021, Winnifred Teo’s case is still unsolved.[3]

Born in 1967, Winnifred Teo Suan Lie was the middle of three siblings.[4] At the time of her death, Winnifred's older sister, Martina, was studying overseas in Australia and her younger brother, Gerald, was studying in Saint Joseph's Institution.[5]

Winnifred Teo was described as having waist long hair with tanned skin, which often caused her to be mistaken for an Eurasian girl.[6]

Winnifred Teo was last seen at 6pm on May 22, 1985 when she left her home at Maryland Drive to go for a jog around her neighbourhood.[1] When she did not return home by 4am the following morning, Winnifred’s mother filed a missing persons report with the police.[1]

In the early hours of May 23, 1985, the police found Winnifred Teo’s dead body along a secluded stretch at Holland Road, over a kilometre from her place.[6] Found in the dense undergrowth, Winnifred’s nude body was covered in mud, bound by her tee shirt and brassiere.[7] No immediate signs of injury were visible on her body.[5] Other belongings, such as Winnifred’s pink jogging shoes, black shorts and watch was found a short distance from the crime scene.[1]

Winnifred Teo’s body was found with six stab wounds to her neck and her hands bound by her tee shirt and undergarments.[7] Her face and body was also found to have bruises, indicating further assault together with the stab wounds.[8]

According to an article written by the Singapore Monitor, further investigations by the government pathologist found that Winnifred had been sexually abused.[9] The nature in which Winnifred’s body was found has led police investigators to believe that Winnifred was the victim of a sex crime, having been raped and subsequently murdered.[6][1]

Police investigators also interviewed frequent joggers and residents around the area which Winnifred Teo was murdered, many of whom mentioned a man exposing himself to passersby several times along the jogging route Winnifred took.[10]

Following Winnifred’s murder, there were speculations afoot that she was murdered due to a business rivalry since her father, Teo Joo Kim, was a prominent director in a timber firm.[6][11] In a 1985 interview with The Straits Times, Mr Teo dismissed reports that his daughter’s death was linked to a business rivalry, saying:

“We’ll leave everything (investigations) to the police. The papers could write what they wanted (sic), but they should check their facts carefully first.”[6]