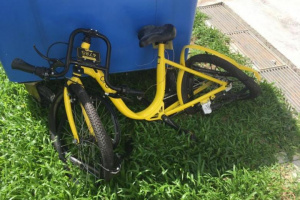 Throughout 2017 and 2018, there were numerous cases of bike abuse across Singapore. Photo credit to David Sun (TNP PHOTO).

Bike sharing was introduced to Singapore in 2017 with the launches of ofo, oBike and Mobike between January and March 2017.[1] From as early as April 2017, there were several reported cases of bike abuse in Singapore. These reported cases were mostly documented on video and circulated on social media.

In April 2017, a youth was filmed throwing an ofo bike. Photo from The Straits Times.

On 17 April 2017, Twitter user @hxngwei shared a video catching an act of vandalism on an ofo bicycle. The video can be viewed here.

The video showed an unidentified teenager lifting a yellow-coloured bicycle up before throwing it. He then stomped on it several times. The video was circulated widely on Facebook and Ofo subsequently lodged a police report over the incident. However, they were unable to identify the serial number of the bicycle from the video. As such, they were unable to assess the damage done to it.[2]

In a separate incident, The Straits Times came across an ofo bicycle painted over in white. The white paint had obscured the company’s logo and colours. The bike was found under an overhead bridge and the lock had also been replaced.[3]

On 9 December 2017, two boys were filmed damaging the locks on ofo bicycles at the void deck of an HDB block. The video can be viewed here.

One of the boys used a hammer-like object to repeatedly hit the lock. A spokesperson from ofo informed news agencies that they were aware of the incident and would work with the authorities to minimise incidents of abuse.[4] No arrests were made.

Between April 2017 and January 2018, there were no less than five bicycle sightings in Singapore canals and rivers. The details are as such:

In all the above instances, ofo and oBike had lodged police reports.

In June 2017, a group of teenagers documented their bike abuse on social media. Photo from The Straits Times.

On 15 June 2017, a Snapchat clip of a shirtless youth throwing an oBike into a canal surfaced on social media. The video can be viewed here.

The youth was then filmed cycling inside Punggol MRT station on an ofo bike. After riding the ofo into a dustbin, he was shown cruising on the road close to a public bus at the Punggol Temporary Bus Interchange[9]

Both ofo and oBike lodged police reports following the incident. The two companies believed that the actions had compromised the safety of the general public.[10] On 19 June 2017, the Ang Mo Kio Police Division established the identities of four suspects aged between 16 and 18 years old. They were arrested in Ang Mo Kio Avenue 9 for committing rash acts and disturbing public order.[11]

On 16 July 2018, an Instagram story of a youth throwing ofo and oBike bicycles into a river went viral.[12] The perpetrator was the same person who threw an oBike into the river a year ago.[13] In two videos, he was shown smiling and smoking a cigarette while pushing bicycles off a pedestrian bridge at Lorong Halus.

When questioned by the police, the 16-year-old expressed that he was peer pressured into dumping the bicycles and had been facing stress at home and in school.[14]

In November 2017, a couple clad in exercise gear was caught on video dumping oBikes into a drain along Lower Delta Road. The video can be viewed here.

In the 13-second long video on Stomp, they were shown wheeling a bicycle each into a drain. oBike came to know of the video and lodged a police report on the incident.[15] On 24 November 2017, the couple had turned themselves in at Bukit Merah East Neighbourhood Police Centre. The man and woman were 37 years old and 36 years old respectively.[16]

In June 2017, a man drunkenly threw an ofo bike from an HDB block in Upper Boon Keng. Photo from The Straits Times.

There were two cases of bike dumping incidents from HDB flats in 2017. Both cases occurred within days of each other.

On 22 June 2017, a 47-year-old man threw an ofo bike from the 15th storey of Block 11 Upper Boon Keng Road. The man was identified as Selamat Mohamed Ali. At the time of the incident, he appeared drunk and was found sleeping along the corridor.[17]

On 15 June 2017, a 14-year-old boy hurled an oBike down a Housing Development Board block at Block 116B Jalan Tenteram. The act was captured in a thirteen-second video. In the background of the video, a male voice is heard saying “this is not my… fault”.[19] The video can be viewed here.

It was first thought that the bicycle was thrown down at least seven stories. Upon further investigation, it was found to be thrown from the 30th floor. The police arrested the youth for committing the rash act. The boy was believed to be living in the block. Neighbours mentioned that they saw the bicycle near the ground floor rubbish chute and assumed that it was spoilt.[20]